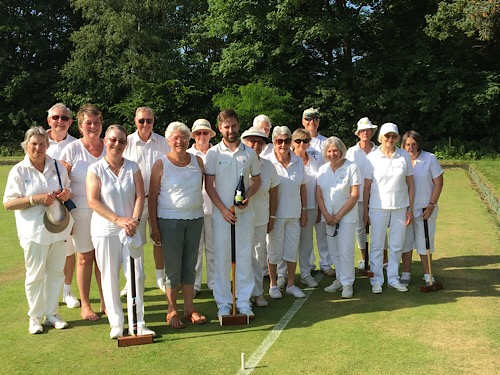 by Andrea Huxley at Guildford and Godalming
8th June 2018 (GC)

A warm summer's day, 16 players and one of the new C level GC tournaments - what more could one want?

For some it was their first ever GC tournament and there was some apprehension as to how it would go. However the usual friendly spirit of croquet players won through and nerves settled for some competitive games.

The morning play provided a few surprises. Two of the competitors with high handicaps, Ken Hughes (10) and Diana Langridge (11) were among the top eight who went through to the knock out section of the competition.

Games continued to be fiercely fought but eventually it came down to the final two. Duncan Catterall (Sydenham CC) and Jan Honeysett (Guildford and Godalming CC) played in a close final game with Duncan eventually winning on the golden hoop.

An excellent start to the new C series so a big thank you to all those involved for making it such an enjoyable occasion.