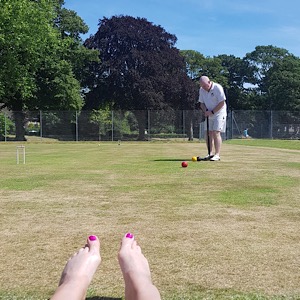 Association Croquet played as an Egyptian using the Hands-Irwin System

The tournament was won by Mel Christie from Northampton Club after a thrilling final round from which any one of three participants could have emerged as the winner (Mel Christie, Patricia Duke-Cox or Adrian Kirby). The lawns were in excellent condition playing fast and true, while the teas and lunches were sumptuous. The trophy is named after Ken Hope-Jones one of the founders of the Peterborough Club and it was a great pleasure that Ken joined us all in his wheelchair for the trophy presentation.

The only handicap change was a cut of two from 20 to 18 for the winner from club handicapper Adrian Kirby. The tournament was managed by Paul Hetherington his first tournament managed since the 1986 Durham University Tournament. With only 8 entrants just two of the available three lawns were used with double banking throughout. Sam Murray deserves special mention as the only player to avoid going to time in any of his games as does Ellen Thompson for bravely playing through four rounds whilst clearly under the weather at her second ever tournament and just a few months since taking up the game.