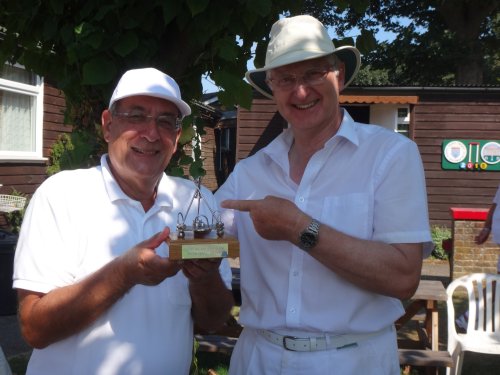 Victor and Vanquished with the Alan Oldham Memorial Trivet

This was played at Southwick on 24/26 July with an entry of 24 players. The heat wave was still with us (hottest day of the year) but the Manager, Bill Arliss had put a cap on the number of games at six per day. Even so some of the slightly older veterans found the going rather tough towards the end of the day but everybody managed to complete their schedules. Four of the competitors were in fact previous winners of the event but there was also several players completely new. Play started with two blocks of twelve with an all play all arrangement. After day one there was no clear contenders in block A but Richard Brooks finished with a 100% record in Block B. All block play was completed at around 3.30 pm on Wednesday with the top four in each block being:

The follow on format was a straight knock out between these eight players. For the purpose of separating equal wins for position in the final knockout, net points were used. With the time still available, this allowed ample chance to play all knock games as best of three 13 pointers. After the first round we were left with semi finals between Nelson Morrow and Roger Goldring plus Liz Farrow and Ian Shore. In the mean time the lower positions were not forgotten and their play was arranged as a 16 player knock out but using single 19 point games. After each round in both knockouts, play was scheduled for all losers to play losers giving all players an equal number of games which I am pleased to say was taken up by most players although some of the best of three losers did resort to 19 pointers. In the plate knock out, Jon Isaacs and John Bowcott reached the final with eventual victory to Jon Isaacs 10-9.

In the semi finals Roger managed to claim first entry to the final with a 7-2, 7-6 victory but Ian took three games 3-7, 7-3, 7-3 to beat Daphne. The main final remained as a best of three but Roger only took two games to claim the title 7-2, 7-5. I think most spectators would agree that Roger moved up a gear for his final match with continual dead centre clearances and the willingness to take on long hoops. He finished with about a ten footer from behind all other balls. Well done Roger.