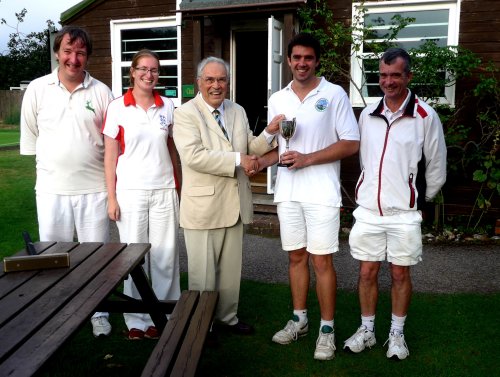 This was the first year of a revised format for this event with the introduction of a second division. A lot of effort had gone into trying to expand the previous format with the use of a second venue as we do with the AC Inter Counties, but this was not practical with the shorter games GC provides. The best solution was to run the event as two entirely separate competitions at different venues. For 2018 we had seventeen entries which were split into a first division of eleven and a second of six with the respective venues being Southwick with eleven lawns and Compton with five. It was considered essential to maintain six teams in division two to ensure a workable and enjoyable format could be used. We did not want the new arrangement to be killed off in the first year by very dissatisfied second division customers. Unfortunately one of our new teams in the second division, Buckinghamshire, had to withdraw at the last moment due to medical problems but some quick action raised a CA Select team and the playing schedule was maintained.

Our additional entries for 2018 came from Nottinghamshire, Hertfordshire, Buckinghamshire, Berkshire and Oxfordshire, the latter team having previously played in the event. Ivor Brand took over the management of the division two event at Compton.

At Southwick the competition started with an all play all giving us a total of eleven rounds with each team having a Bye round. I am sure most players expected that Nottingham with four -4's on board would manage a 100% record but quite obviously Kent had other ideas and in round 2 managed a 2-1 win over Nottinghamshire. I suppose this was to be expected as Kent were only just behind in the handicap stakes having two -4's supported by two -3's. Kent managed to keep their winning form for the rest of Saturday but were still in second position at the end of the day as Kent had taken their BYE round but Nottinghamshire had not. Both Nottinghamshire and Kent had six match wins but were closely followed by Somerset with five wins and Northamptonshire with four. Although rather dull for most of the day, the rain had managed to keep away.

Four rounds were needed on Sunday morning and early afternoon to complete the all play all. Yorkshire/Durham started the day well by taking out Kent with a 3-0 win whilst Nottinghamshire finished the session with three 3-0 victories. Somerset carried on in their winning ways to finish a very creditable third with seven wins and the overall figures after the all play all are shown below. Luckily for the Manager, no ties to sort out and all teams were quickly ranked in results order and separated into four pairs and a three for the final two games. Each of the four pairs played one another twice with the doubles and singles roles being reversed in the second meeting. The intent of the format was that each team in the pair had to had to win both of the final matches to claim the upper position in the pair. If the matches were shared, then the result of their game in the all play all would determine the upper placing.

In the Championship pair, Nottingham had to win both final matches as Kent had won their first meeting but they managed two 2-1 victories to claim the title. In the second pairing Somerset and Yorks/Durham shared the 2-1 wins but Somerset took third place with their 2-1 win over Yorks/Durham in the first meeting. In pair three, Northampton ensured they kept fifth place with a 2-1 and a 3-0 win over Hertfordshire. In the pair four matches Middlesex gained two 2-1 victories over Dorset to claim seventh place.

The bottom three teams were treated differently in that they each played each other once but by splitting the singles and doubles into separate rounds, they were able to complete the three matches in only two rounds. Hampshire ensured they were free from the relegation zone by beating both Leicestershire and Sussex 2-1 and taking ninth place. Leicestershire beat Sussex 2-1 taking tenth place.

CA President, Quiller Barrett, finished off the day by presenting the trophy to Nottinghamshire.

The second division was played at Compton and used an all play all twice format. It was originally intended to complete the day with a play off as the likelihood of a tie was quite large. However at the end of the all play alls, the results were well defined as the table below shows and it was agreed by the Manager and all teams that no play off was necessary and a reasonable finishing time could be maintained.

The six counties battled on well prepared lawns and by the end of the first day Glamorgan hand a slender lead over the following chasing pack all seeking to finish as champions and so secure their pending promotion to division 1 next year. The air show was a bonus to witness and the 'Red Arrows' provided a great display for us all to enjoy. (some the of croquet was'nt all that bad either) Only a few games went to time which again reflected the excellent conditions of the lawns that the grounds man had prepared. At this point, I should apologise for the extra 20+ mins that I and my opponent Richard took on the 13th hoop in round 1. (After this initial hiccup, time was caught up and the event ran generally to time.)

The following table shows the full results from the all play all format.

Thanks goes to all the staff at Compton especially Hillary for helping to make the tournament run smoothly and most importantly an enjoyable weekend, which I hope will be repeated next year?

No doubt this is very much in the minds of some Organisers but it will depend to some extent on the number of teams that enter next year. Whatever the outcome, the top two at Compton are guaranteed a place in the first division next year but the number of relegations may only be one if the total entry does not exceed eighteen.

Any potential new teams are warned to have their proposals ready by the end of the season as any growth more than one will require a change in venue which has to be arranged this year.