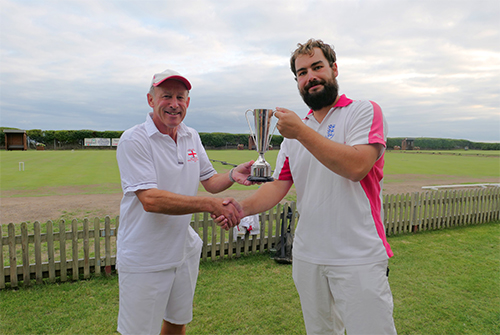 The Top GC Selection Eight (also known as "The Musk's Cup") was held at Ramsgate Croquet Club this year. A field of 8 very strong entrants made up the field. Seven of the eight entrants had reached the knockout stage of the British Open Championship this year (and the eighth entrant didn't play the event!). Saturday started off in glorious sunshine, and second seed Stephen Mulliner win the award for fastest match finished (which surprised nobody, with his "wind him up and watch him go" style of play). Burridge, Savage, Bilton and Mulliner got off to a good start, which set the theme for their days play. The four of those went unbeaten in matches, and the block finished on Saturday with four players on 3 wins, and four players yet to chalk up a match win, a peculiar and entertaining situation indeed. The Saturday finished with Stephen chalking up another accolade: last to finish. Rachel Gee and Stephen Mulliner battled valiantly as the sun was beginning to set (and the manager was beginning to fret, with a meal booked for 20:30, and game three commencing at 19:15!). Stephen silenced the alarm bells by taking game three 7-2. The players of both GC Eight events dined at a mutual venue between the two venue, Ramsgate and Canterbury, and an enjoyable evening was had by all.

Day two was set to divide the top runners in the block, as they were all scheduled to play two of the three other 'winners'. Savage made a good start against Mulliner, but Stephen had other ideas. The match got interesting as the wind picked up, with both players demonstrating the dramatic effect weather conditions can have on play. Stephen took the initiative in game 2 with a 6-5 lead, but Savage sent the game to the golden hoop. Savage hit a clearance at 13 and applied some real pressure, but Stephen made no mistake with his 7yd hoop attempt to level the match. Game three also went to the thirteenth, with Savage having control this time around. He decided that the game would be far more eventful if he firmed his first attempt at the hoop off of the far wire, and so a battle for control ensued. The final nail in Stephen's coffin was him clearing his own ball at 13, and Savage made no mistake in taking the match from there. Ian Burridge had a two game win against Richard Bilton, which teed up a delightful fixture of two undefeated players, and two players with one match loss each. The players decided to get going before lunch, in an effort to beat the worst of the rain, and Savage took the lead in his match with a powerful 7-4 win. The weather got worse, and Burridge got better, which was not an ideal combination for Tobi. Ian motored on with little to no regard for the weather, and took the remaining two games authoritatively, 7-4 7-3. Stephen took the first in his fixture 7-4, but Richard shot truly and consistently to a 7-5 win in game 2. Richard struggled with the wind as it grew stronger and more blustery, and succumbed to Stephen 7-4 in the third. At the other end of the block, Rachel and Lionel had got going, leaving David and Peter to fight among themselves for a match win. Lionel took out Rachel in three to accumulate two match wins, and David avoided the wooden spoon by beating Peter. At this point, two matches into an expected three on Sunday, the rain was relentless. Players were offered a 7am start in favour of abandoning play for the day, of which 50% of the chickens players chose to accept. Mulliner vs Dray had already commenced before the offer was made, and so they chose to soldier on. Burridge vs Gee also took the hardy approach, with both players favouring a lie-in. At this stage, the qualifiers were fairly obvious, and Tibble was the only potential upset, but he needed all the stars to align to make it happen. The remaining two matches were only really useful to determine the order of the KO round. Both Burridge and Mulliner walked away victorious (and somewhat soggy), and home hero Charlie Martin cleared the lawns under a lot of waterproof clothing! Charlie had also offered to have two of the four lawns prepped and ready for a 7am start as well, so special thanks to him!

Peter and Richard kicked off Monday with a flying start. Both games of the match were over within an hour, in Richards favour. Lionel took advantage of the fact that Savage was at the club in body but not in spirit, and took the first game comfortably, 7-3. Some sort of internal alarm clock went off on the way to corner four, and Savage made no mistake in game two, tying the game up at the seventh hoop. Savage took this high into game three, and wrapped up game three by 08:45 - just in time for a 9am start to the days scheduled play! The manager was delighted to have the event back on track, and round seven commenced on time. This saw two crucial matches for placings in the knockout - Burridge had led throughout the weekend, but needed to see off Mulliner to ensure top spot. Stephen needed to win in two, to gain the advantage in net games, as a match win wasn't enough. Stephen did just that, and so Stephen went into the KO in first place. Richard needed a little more out of his match, as not only did he need to beat Savage in two, this would have tied both competitors on both matches and net games, and total wins, so Richard needed to nail Savage to bolster his net hoops, as Savage was superior at the time. When the time came, however, Richard was in for a bit of a shock. Savage took control of the match with an impressive 7-2 win, that ensured him third place in the block. Richard played well in the second, and responded with a 7-4 win, but Savage played some exhibition croquet in game three to take the game 7-3. The shot that won the game was from near the eastern penalty point, and Richard could do nothing but stand and applaud in the wake. Savage ended the day on equal wins to the top two players, all on 6 wins, but Savage had an inferior net games.

Rachel Gee opted to spectate for the semifinal, and David Dray wisely chose to spend the rest of the bank holiday with his young family, which gave Lionel and Peter byes into the final of the consolation playoff. Yet another best of three was to go all the way, and there was nothing to divide the players at the end of game 2, with a scorelines of 7-5 7-5. Lionel took the upper hand in game three, and took the match with a 7-3 victory. The playoff was said to have been played in high spirits, and the sound of laughter was heard ringing across the club! The semi-finals were a rather more serious affair, however. Not much laughter could be heard from court four, where Savage played Burridge, but there were one or two emotional outbursts. Game one had no clear player in control, but Savage got a break when he ran 9 into the jaws of 10. That was enough to see him through to 7-5, and he kept control until 5-3 in game 2. Hoop 9 was a crucial point in the game, swinging the game either 6-3 or 5-4, which are vastly different scorelines. Both players knew this, and battled hard for the point. Ian ended up with control of the hoop, and Savage had a long range make-or-break jump shot. For those unsure of the outcome of the shot, Tobi's reaction left little to the imagination, and he tied the match up at the next hoop. Richard and Stephen traded clearances, shots and games, to go game all. Following a stop for lunch, Richard took control of the third game. Stephen did what he does best, and never let up. The game swung from 2-4 to 5-4, and this change in momentum was enough for Stephen to tie up the semifinal at hoop 12. Richard was automatically awarded third place

This set up a final between Stephen Mulliner and Tobi Savage. Savage demonstrated he meant business by clearing from the starting corner, but his hooping was noticably nervy at times. Stephen capitalised on these errors, and took game one 7-5. Savage seemed to be running on empty, and needed to play better in order to defeat the Duracell Bunny that is Stephen, but he rallied up midway through game 2 to overtake Stephen and win the game 7-3. The players stopped briefly for tea, and Savage carried forward his boost in confidence and regained his hoop stroke, and got game three to 6-4. With one eye on the croquet and one eye on the trophy, he was presented with a clearance to take control of his winning hoop. After banishing Stephen to a side boundary, Stephen shot for the clearance and just snicked it, adding a few feet to Tobi's shot to win the event. Savage made no mistake, and ran eleven to become the Musk's Cup holder for 2018, to applause from the spectators, who had amassed throughout the day.

Many thanks to Ramsgate Croquet Club for hosting the event in such superb fashion. The players commentated on the quality of the lawns, the firm hoops, the spectacular lunches, tea & cake, and indeed the cheering supporters. Special thanks to Trevor Longman, Charlie Martin and Bob Ellis for prepping the hoops and lawns each day, and indeed for a 7am start on Monday!