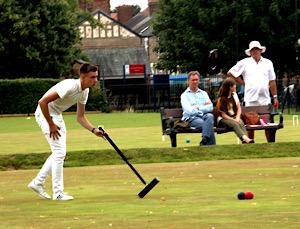 At the end of Saturday's play, three players - Paul, 19-year-old Callum and David Harrison-Wood - were leading the field, with Callum having already beaten Paul. On Sunday, Paul and Callum both beat David, setting up an absorbing final between Paul and Callum with David winning the 'plate'.

The final was an exciting affair, with both players hitting in well and playing accurate breaks without making mistakes. At the end, Paul was unable to complete what would have been his third triple of the weekend, but pegged out two balls, leaving his remaining ball on rover and Callum's on 4-back. Callum missed a long roquet (for what seemed like the first time in the whole weekend) and Paul completed a tidy finish to win the trophy.

The tournament was fully subscribed with 13 entrants. 39 games were played and completed, with no time limits being necessary. The three lawns at York were in good condition, if somewhat patchy as an understandable consequence of the near-drought conditions which had applied for the preceding four weeks. There was a downpour on Saturday night, and the weather was threatening throughout Sunday, but it held off and the tournament was completed without anyone getting wet. Peter Thompson's tournament management was much praised for its courtesy and efficiency and some of the players and supporters enjoyed a convivial dinner at a local restaurant on Saturday evening. This inaugural White Rose tournament was judged a great success and is set to be an annual fixture in the national croquet calendar.