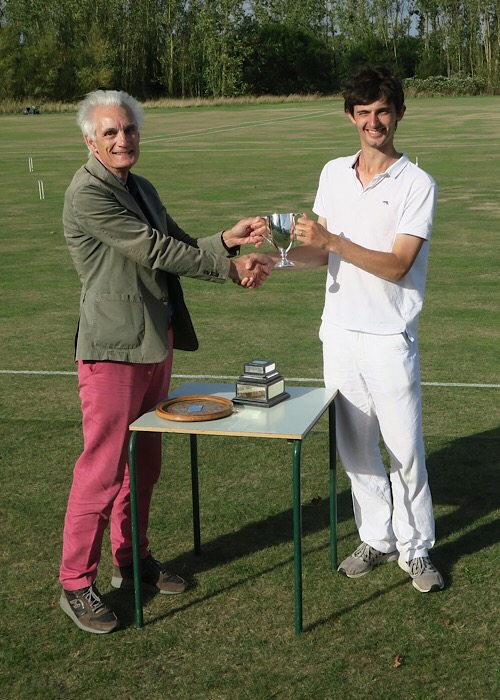 Thomas, a member of the Enfield club, had had his handicap summarily reduced from 20 to 18 after the area final at Surbiton. It wasn't enough, as he won all his five games by an average of over 19 points which has brought him down to 16. His opponents might have said it was not before time, but it also has to be said that there were occasions where the combination of an imposing number of bisques and Thomas's mercurial and sometimes unconventional approach to break-building had them freezing like rabbits in the headlights and playing shots that made his job easier than it might otherwise have been.

The final was held at Wrest Park, with George Collin acting as manager and ROT, ably supported by club secretary Tim Brewer who looked after the catering and administrative support. The event was played as a five round Swiss, full bisque base 10 with three hour time limits. The home club had two players in the final: David Woolley who was second overall with four wins and Richard Keighley with one. Three players were making their second consecutive appearance in the final: Phil Nuttall from Bury who had three wins and Julie Sheahan (Merton) and Robert Upton (Dyffryn) with one each. The others were Adrian Apps (Bowdon) with three wins and John Smallbone (Watford) with two. John was unfortunate in that his mallet shaft unaccountably snapped on the first day and he borrowed George's mallet as being the only one available with the same length head.

Eagled-eyed viewers will notice that the cup is not the same as the one awarded at last year's final. The profusion of Trevor Williams Cups meant that instead of the earlier 1922 version used for the All England Handicap we somehow ended up with the 1928 version, listed in the CA Centenary Yearbook as one of the prizes for the South of England Week. John Bowcott, Vice Chairman of Council, came along to present it. Our thanks to him and also to Hilary Smith, the event director, who had to cope with a change of venue for the final as well as everything else associated with coordinating a national competition.