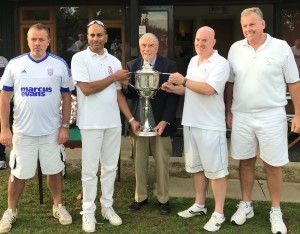 Surbiton met Bowdon on a fine day at Surbiton, dodging the very wet weather of the previous day. Surbiton fielded four-time world champion Reg Bamford, together with England test captain Samir Patel. All the morning games began in scrappy and interactive fashion, but Surbiton's line-up proved too strong in the end, and they took a 3-0 lead at lunch time.

In the afternoon, Chris Farthing had another interactive game against Martin Granger-Brown, whilst Patel secured victory over Colin Irwin with a quadruple peel, and Sam Murray completed a sixth turn triple peel against Brian Kerr.

That left David Walters fighting for some pride for Bowdon against Bamford. With both players having taken a ball to 4b, Walters cornered from Bamford's leave. The latter could not get his triple underway, so Walters had a 'final' lift. This he hit, but stuck in 1. When Bamford missed, Walters took his 4b ball to the peg, and pegged-out Bamford's forward ball. Bamford hit, but missed his return roquet after 4b, and Walters held his nerve to construct a three ball break to finish, and earn a point for Bowdon.

This was a third successive inter-club win for Surbiton. The considerable volunteer help for finals weekend received due thanks, and CA President Quiller Barrett presented the trophy, detailing its long and interesting history.