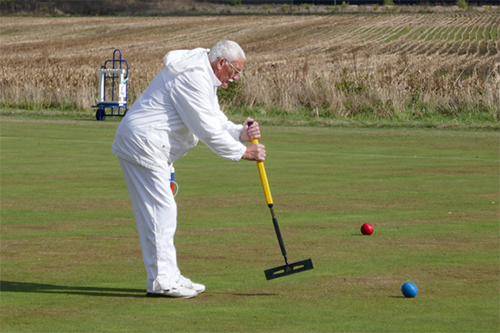 The winner in action

Peter Aspinall won the Wrest Park Paul September Handicap. He achieved an unbeaten record over the 2-day Egyptian event, storming to a 69 point rating, 7 points ahead of his nearest rival John Bevington.

Against Tony Elliott, John Bevington had a late evening encounter which appeared to be going in Tony's favour. Unfortunately for Tony who missed the peg out, his opponent was now joined up on the boundary; so John gradually overhauled the deficit and eventually won by 2.

The game between Eric Audsley and John Hall was also a tight one. John Hall won by 1 just before the prize giving ceremony.
Rain spoiled Saturday afternoon and Sunday morning; but the sun came out to give us a gorgeous afternoon in the end.

The handicaps ranged from -.5 to 12. 40 matches were played with time limits of 3 hours and 12 Wharrad turns. However, only one match needed it.