CA Women take on the World 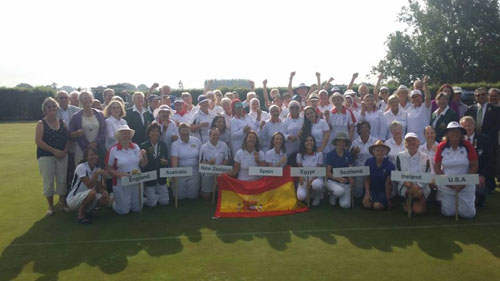 Apart from Jenny (top seed) the other five CA members, the three England players and two Scottish players are all in block positions three to six, therefore will have played the top two seeds and the bottom seed in their respective blocks. This means that the final two days of block play are the most critical to them qualifying for the knockout. The top four will be qualifying from each block, resulting in a field of 32 players for the knockout stages.

By the way, I've had my croquet consultant helping write this.

Here is a little summary about our six players, please joining me in wishing them huge success for the second half of the block play.

Ann Brookes (A Block) will clearly be disappointed having lost her first three matches, however, her last three matches will always have been the ones which are critical to her qualifying. Now that she has had the time to acclimatise, I am sure she is looking forward to some better successes.

Jenny Clarke (A Block) has clearly produced outstanding play in all of her matches and has achieved four wins without dropping a game. Jenny is undoubtedly matching up to her seed 1 status and will surely be one of the first to qualify for the knockout stages.

Jane Pringle (B Block), as she would've hoped, has won her match against the bottom seed in the block. Although she has not been successful against the top two seeds, she can be delighted she took both the strong Egyptian players to the golden hoop in both second games.

Kath Burt (E Block) is currently in the block which is slightly behind schedule due to some lengthy tussles, but having won one out of her two matches she has made a steady start to her campaign. Kath, being the most experienced England player having played competitively since 1999, will I am sure be able to draw from her experiences and drive the last few days of play with positive momentum.

Lorna Dewar (F Block) has two wins out of three and has beaten the top seed in her block, having only been playing competitive croquet since 2017 this is a fabulous achievement. Lorna has been one of the most improved players in the UK during the last two seasons and we are excited to see what her future achievement will be.

Rosemary Saunders Robertson (G Block) has won one out of her three first matches, meaning that all is to play for during the next two days. As another relative newcomer to the sport, with her first competitive game in 2017, I am sure she will be enjoying the experience of playing against some of the best women croquet players in the world.

Jayne Stevens (H Block), having won all of her first four games, reached two match wins out of three after the first two days of play. Her one match yesterday was played against the top seed, and although she was not successful this time she will be in a positive position going into her final two days of play. As another fast improver to the sport, having only played competitively since 2015, Jayne will be drawing upon her tournament successes, most recently the National Forest Championship, to motivate her through the final matches.

By Alison Maugham (And her glamorous assistant Tim King)