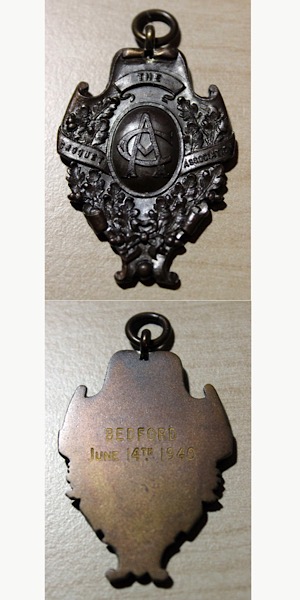 Tim Brewer, Secretary of Wrest Park CC, was sent these photos of a CA medal from 1940 by David Webb. We asked if any readers could shed light on its origin.

The Council of the Croquet Association have decided to present Bronze Badges to a selected number of registered Croquet Clubs in the United Kingdom (other than Roehampton, Ranelagh and Hurlingham), whose membership includes at least twelve Associates.

The event will be "Handicap Singles" open only to members of clubs who are also members of the C.A., and the conditions in reference to entrance fees and additional prizes will be left entirely to the Committee of the respective clubs.

In the case of an Associate being a member of more than one registered Club, such Associate would only be eligible to compete at one event for the Badge, but can choose at which club he will enter as a competitor.

The names of the winners will be published in the CA Gazette.

Applications for these badges should be sent to the Secretary of the C.A."

There were no formal tournaments played during the war so I expect that this was given for an informal club event and may have been one left over from an earlier year.

I suggest that these medals very likely belonged to Miss DD Steel of the Bedford Croquet Club.

Another of her trophies, I think, the Beddow Cup, was found at an auction a while ago, and in 1939 she was the holder of the Mixed Doubles Chamionship which , like the Ladies Open used to be given a CA Medal, I think. I remember playing some friendly matches against Miss DD Steel at the Bedford Club in the 1950's.

I was intrigued to see the picture of the CA bronze medal from 1940 (in the latest Gazette and on the CA website). I have a medal of identical design which I won in Pretoria in 1970 as runner-up in the South African Open Championship. At that time (I don't know if the practice is continued today?) the CA gave two medals each year to the South African Croquet Association: a silver medal for the open champion and a bronze medal for the runner-up. I have a vague memory that similar presentations were made to the national associations in Australia and New Zealand, but have never had that confirmed. I cannot recall if the design of the 1970 silver medal followed that of the bronze one shown, or was circular like those presented by the CA today.

Sadly the Pretoria club is no longer in existence. In my time in the city (1968-1971) it consisted of two courts, one of grass (which could not be used in the long, dry Transvaal winter) and the other of "gravel" (essentially coarse sand, rolled to produce a hard, very flat, lightning fast surface, which could be used year round). The croquet club and a bowling club (whose greens were borrowed for croquet when the national championships came to Pretoria - wonderful to play on!) were located immediately adjacent to Pretoria's principal rugby ground, Loftus Versfeld, venue for many international matches. I believe that it was expansion of the stadium that led to the demise of both the croquet and bowling clubs, but I'm not sure quite when.