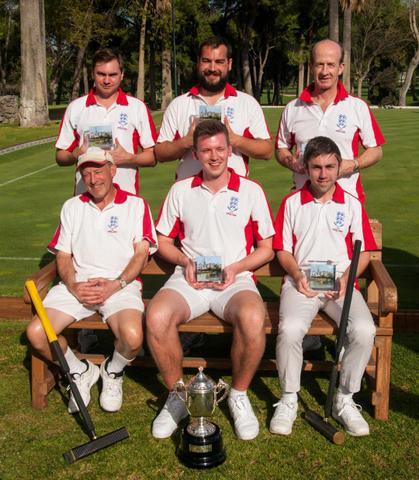 The inaugural GC Test Match between Spain and England was held at the fabulous Real Club Pineda in Seville over the weekend 15-17 March. Blessed with cloudless skies and temperatures into the mid-20s, the top six GC players in Spain hosted the visiting England team for a 21-point Test (12 singles, 9 doubles), which was tightly fought on all three days. The scores at the end of Friday (England 4, Spain 2) and Saturday (9-6) meant the result remained in the balance at the start of the final round of six singles on Sunday morning, but it was England who eventually came through to take the Test 13-8 and lift the splendid trophy. The scoreline does not tell the whole story however, as Spain finished with only 19 hoops fewer than their English counterparts after a total of 55 games!

The croquet was highly competitive throughout and there were some impressive individual performances from both teams, but it was the generosity and kindness of our Spanish hosts that will live longest in the memory. It is difficult to imagine how they could have done more to welcome us and look after us during the weekend. They have set the bar extremely high and it will be a very hard act to follow when England host them for the return fixture in 2020 (12-14 June, venue TBC).

England boasted much the stronger side on paper, with 4 players in the world's top 30. World no. 7 John-Paul Moberly captained the team while Spain were led by Pepe Riva, the world's 8th best Association Croquet player. England handed a debut to their Singles Champion Richard Bilton, however he was the only first-timer as Stephen Mulliner and Tobi Savage represented England in the GC World Team Championship and Jonathan Powe and Harry Fisher earned caps in recent GC Home Internationals.

This was only the second time the Spanish side had played an international GC team event; the previous time being Tier 2 of the 2016 World Team Championship. Without star player Riva, they narrowly missed out on the title and promotion to Tier 1 by losing in the final to Australia. Returning were the 4 Alvarez-Sala brothers (surely some sort of record for an international team in any sport); Andres, Jose, Manuel and Gonzalo, and Rafael "The Bull" Romero.

The singles rounds were split between Friday and Sunday leaving the doubles rounds for the Saturday and a potential mammoth nine rounds of games to be played in one day!

The first round of singles was only scheduled to start late on the Friday afternoon, so in the morning the English team were treated to a guided tour of the magnificent Alcazar palace. The oldest royal palace still in use in Europe, it was originally a muslim residential fortress until partly destroyed and rebuilt by Castilian Christians. The gardens were particularly beautiful and it is a must see for anyone visiting the city.

When it came time to "tee off", both sides were raring to go. The first round of singles pitted Riva vs Mulliner, JAS against Savage and GAS against Fisher. The tie of the round was Savage vs JAS, where Savage having taken game 1 and being pegged back by JAS winning game 2 and going 6-4 up in game 3, took hoops 11 and 12 before running a boundary hoop 13 to complete the comeback with JAS's next ball only a yard in front. Unfortunately for spectators worldwide, who were watching a livestream of the match courtesy of Moberly holding Savage's phone, the phone's battery died just as they approached hoop 13 in game 3!

In another extremely close contest, Mulliner unluckily peeled Riva through hoop 13 to lose the deciding game 6-7 - another point decided by the closest of margins. Fisher beat GAS in three leaving England 2-1 up after the first singles round. The second round's games were just as tense. Moberly registered a "grande saltaire" (the Spanish translation for "big jump") in game 1 vs AAS from the South boundary in front of hoop 9 to wrestle back a seemingly lost hoop. Moberly carried the 5-4 lead through to win the first game and also won the third to secure the match. Bilton hadn't quite got into his groove yet and went down in two to MAS, and in another brilliant comeback win, Powe beat Romero 7-6 in game 3 after also coming back from a 4-6 deficit - these comeback wins would prove crucial!

The official opening ceremony followed on the Friday, where speeches were held, national anthems were sung and delicious canapes were endlessly thrust under our noses. The evening must have won the prize for latest time to leave a croquet club - after 1am!

Saturday's doubles rounds meant 9 points were up for grabs; a day in which the Test could be won or lost. As the 2018 British Open Doubles champions, Moberly partnered Savage and were the first seeds. Mulliner partnered Bilton after also doing the same at last summer's British Open and Powe partnered Fisher. The Spanish lined up with Riva partnering AAS (so 1st seed partnering 2nd), brothers JAS and MAS playing together and finally GAS partnering Romero.

In the first round of three matches, Moberly and Savage beat JAS and MAS in three games, but very nearly lost in two. In game 2, and a game down, yet another 4-6 deficit was turned into a 7-6 win. Once the game was levelled at 6-6, the Spanish gained control at hoop 13 until an unfortunate missed clearance by MAS and a 20 yard clearance from Moberly gave Savage a chance from the North boundary. He had already missed two from the same distance, but made absolutely no mistake third time round and ran with no wire to level the match at 1 game apiece. The English pairing comfortably won the third to take an unlikely and important point. In perhaps the most impressive doubles performance of the weekend, Mulliner and Bilton beat the top Spanish paring of Riva and AAS in two games, while Powe and Fisher went down 1-2 to GAS and Romero.

The second round saw the top seeds play each other. Moberly and Savage won the first game against Riva and AAS, but couldn't prevent a Spanish fightback and lost the second and third. Mulliner and Bilton continued their good form and won 2-0 against GAS and Romero, but Powe and Fisher lost in two close games to JAS and MAS, giving Spain a 2-1 victory in the round. This left the score at 7-5 to England with one further doubles round to play on the Saturday.
Moberly and Savage needed three games to overcome GAS and Romero, but one of those did include a "grande saltaire" from Savage; nailing a 6 yard jump over Romero's ball in the jaws of hoop 8 (which he had played there from North of hoop 7!) which was captured on film for Savage to add to his growing video collection. Mulliner and Bilton made it 3 doubles wins out of 3 by beating JAS and MAS, although the Spanish pairing did claim a game off them. Riva and AAS outclassed Powe and Fisher to win in two games to leave score at 9-6 to England.

The fact so many of the doubles matches went to three games (including all three of Moberly and Savage's) meant it wasn't until after 11pm when the players, players' families and Spanish croquet dignitaries sat down for the weekend's formal meal. The excellent cuisine gave the players enough energy to get back to their feet and hit the dancefloor (some more than others - Mulliner was first up there from the English; his infinite energy never ceasing to amaze). Fisher went head-to-head (drink-to-drink) with Romero before their singles match the following morning (they were still dancing 7 hours before they were due to play) as beer quickly turned into whisky shots!

Sunday morning brought with it the last singles round and the final 6 points of the Test. The Spanish needed to take five of them to stage a big comeback win, while the English only needed two to take the trophy across the Channel and bring croquet home. To Romero's disappointment, it seemed that the alcohol hadn't taken its toll on Fisher as he won a high quality match 2-0 and gave England one of the two points needed. As the other players in the first three singles matches of the morning, Mulliner or Savage looked to be in pole position to score the Test winning point, and so it proved as Mulliner won the third game against AAS to secure the trophy for Blighty! Savage recovered from losing the first game against MAS to win as England won a round 3-0 for the first time - and very timely indeed!

The morning's second round of 3 matches started early at 11am and double banked to allow plenty of time for players to return home in the afternoon, meaning the Test was still needing to be won as Moberly, Bilton and Powe started the final matches of the weekend against Riva, JAS and GAS respectively. Bilton continued his form from the doubles and raced into an early 1-0 lead winning 7-2 in which all the hoops he ran were from 5 yards or more. Although he ran hoop 12 from the North boundary in game 2, he lost it at hoop 13 and also the third to allow JAS to gain revenge for his defeat at the British Open last year.

The two top seeds, Moberly and Riva, played out an absorbing contest on the show lawn. Moberly played well to win the first game however Riva rallied in the second and was ahead throughout. At 5-3 up after Moberly had missed with his hoop attempt, Riva missed the chance to lead 6-3. Moberly levelled at 5-5, and although Riva took hoop 11, Moberly produced his best croquet of the event to take the game and the match. A la Reg Bamford in the 2013 World Championship final, Moberly, with a ball in front of 12, cleared Riva with his other ball to the East boundary sending the clearing ball to the North boundary onside for hoop 13. Riva missed his clearance from the East boundary, and after Moberly had ran hoop 12 and Riva played off the North boundary, Moberly ran hoop 13 from the boundary to take the win.

Powe was the last to finish as he lost to GAS 6-7 6-7 to make the overall Test score 13-8 after three days of passionate, absorbing croquet. The team played with the pressure and expectation of being clear favourites on paper and dealt with a loud and partisan home crowd (some of whom had driven 5 hours from Madrid just to be there!) and a fiercely competitive Spanish side.

The weekend was wrapped up with the trophy presentation and another rendition of the National Anthems.

Thanks to Real Club de Pineda for hosting this magnificent event and for the amazing hospitality of our hosts. We very much look forward to the return fixture in England next year.

Full results can be found on CroquetScores.