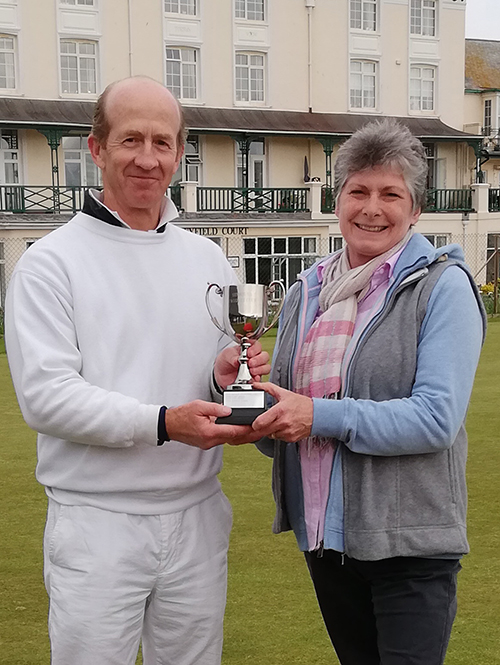 Jonathan Powe won the Sidmouth Golf Croquet Championship, a qualifying event for The English National GC Singles Championship (Ascot Cup). Locally known as the Haste Cup, this tournament was played over the weekend of 27 and 28 April.

On the Saturday the 16 players were placed into two all-play-all American blocks. The weather was very windy making accurate casting difficult with strong gusts moving balls. In block A Jonathan Powe and Richard Brooks won 6 of their 7 games played. Stuart M Smith also qualified for the knockout by winning 4 games. The last game played and the last game to finish in the block was between Tim Jolliff and Colin Britt both on 3 wins. This game was watched with interest because the winner would qualify for the remaining quarter-final place. Tim won 7-6. In Block B Ryan Cabble (6 wins) and Graham Good (5 wins) were first and second. Tim King and Ivor Brand, each with 4 wins, also qualified

On the Sunday the wind abated so playing conditions were easier.

The knockout results are as follows:

The Haste Cup was presented to Jonathan Powe by Amanda Haste, a long standing member of the Sidmouth Croquet Club.