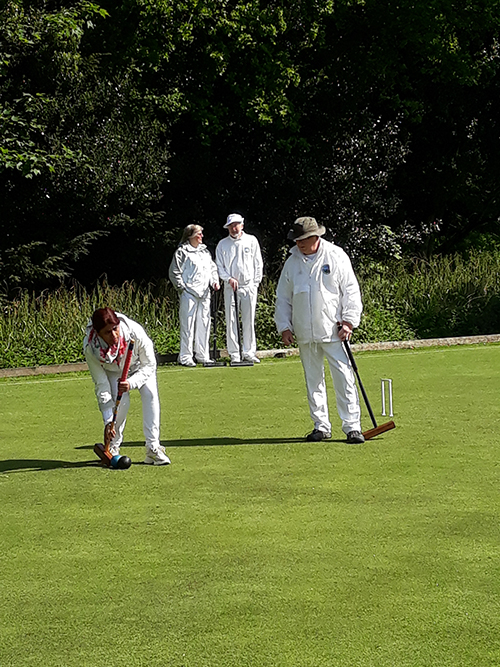 The Nottingham club were proud to host for the 6th consecutive year the Memorial Peels tournament. The 2019 Peels, 9-12th May started in rather cold and damp weather with players wearing waterproofs, woolly hats, scarves and gloves initially, luckily the weather gradually improved with Sundays play in glorious sunny conditions. Heavy thunder rain on Friday teatime curtailed play when the lawns were unplayable.

The tournament attracted 7 ladies and 19 men, from 7 clubs, with handicaps ranging from -1 to 22, fortunately, plenty of new bisques had been made during the winter for such an event.

Several players were playing in their first CA event, the games were played in a friendly but competitive spirit. There were numerous mini coaching sessions after the completion of some games where an experienced player thought that an inexperienced opponent might have fared better taking a different line of play, indeed this proved invaluable for one player in one of his next games, who later thanked his 'coach' for his instruction in getting a corner ball back into play and went onto peg out.

Experience told in the final of the mixed doubles, though it was a very close run thing. Both pairs, were new to the event, but Ian had been playing handicap doubles for many years longer than the other three combined.
With 7 1/2 bisques, Ferzana & Mark made early progress, Mark was most of the way round when they finally ran out. Ian had yet to start, but was comforted that Diana was a hoop ahead of Ferzana. It should have been plain sailing from there, but Ian repeatedly broke down in what should have been decisive breaks, being unable to resist the temptation of peeling.
With a minute to go, the score was level with Ferzana laid up by her hoop, but a hit-in led to a three hoop lead and a leave which proved sufficiently defensive, despite Ferzana hitting the last shot.

Handicap Singles (Base 10)
Both the mens and ladies singles games were played as a flexible swiss with the top four players in play-offs on the final day.

The ladies final began with Wendy confidently running hoops, using her bisques to good effect. Sue countered making some progress but allowed Wendy to forge further ahead when a missed roquet ended her turn. Sue managed to get a break together when she broke down at 2 back, Wendy was able to keep ahead and finally pegged out just within time.

Early play saw both players having good spells on the lawn, Mike eventually taking his first ball to peg, but then stalled when he had a problem in running hoop 2 on more than one occasion with his second ball. Alex also took his first ball to peg and took the opportunity to peg out Mike's first ball. Alex being a couple of hoops behind Mike then took the chance of playing a 3 ball break, edging into a slender lead. As throughout the tournament, Mike was hitting in across the lawn and ultimately won +10.
Alex had at least made Mike use all his bisques, quite an achievement in itself, as Mike had won all of his eleven games in the tournament, several +26 with bisques standing and most well within the 3 hour time!

Mike Hedge and Gordon Mills (h/c 14, Pinchbeck), both in their first CA tournament, were awarded their Bronze Merit Award.

Friday just happened to be Mike's birthday, when he calmly scalped Alex +20, Omied Hallam +26 and the manager +26 in double quick time!

For his endeavours, Mike's handicap has been cut to 8.

The CA's National Croquet Day, held on Sunday, attracting some 75 members of the public, several were able to watch the Peels competition in progress.

Once again, many thanks to club members for providing ample good fayre for everyone.