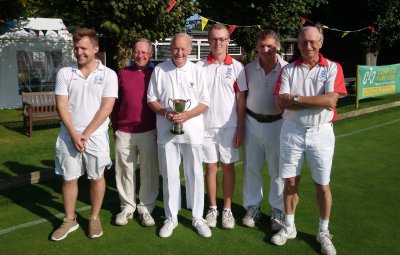 I am sure most players at the start of this event had Nottinghamshire down as firm favourites. With a team of four -4's, they were on paper by far the strongest. There were only three more -4's in all the registrations and they all came from different teams. All appeared to be going to Nottinghamshire's plan until round nine as they had achieved a eight wins from eight matches including a 2-1 win over their nearest rivals, Somerset in round eight. Round nine brought them against Lionel Tibble's Northamptonshire who started with a doubles win over Rachel Gee and Ian Burridge which was then followed by Jayne Stevens (-1) beating James Death (-4) by 7-3. This put a very different focus on the league tables as Somerset's early collection of 3-0 wins put them very much in the driving seat. Round nine also brought a further 2-1 win for Somerset against Durham/Yorks who were the only other contender for the title.
Somerset sealed their victory with a final 2-1 win over Dorset whilst Durham/Yorks, not to be outdone by Northampton, finished with a 2-1 victory over Nottinghamshire and pushed themselves into the runner up spot.
There was also considerable activity at the bottom of the table which is now much more important because of the prospects of relegation to division two. Hertfordshire had a very poor competition and with only one win to their credit, there was little they could do in the last three rounds to improve their position. However directly above them were four teams, Middlesex, Glamorgan, Surrey and Leicestershire to whom the last three rounds mattered considerably and finally it proved to be Leicestershire who would join Hertfordshire in division two next year.
Despite some atrocious weather just before the event, we managed to get away with just one sharp shower on the Sunday morning with mostly sunny weather for the rest of the weekend.
As someone who has been much involved in the development of Golf Croquet for the last two decades, it is extremely pleasing to note the number of very young players that were involved in the top teams for this event. It bodes very well for the future of this sport.
The final league tables were as below:

NOTE The table includes corrections to the original figure published following comments from two of the teams. It does not alter the table positions in any way.

Initial reports from Compton for division two show that Sussex were the clear winners with 7 from 10 games whilst Essex just managed to beat Bucks into second place. Both Essex and Bucks had six match wins, +2 net games and shared the honours in the matches between themselves. Essex had the best net points.