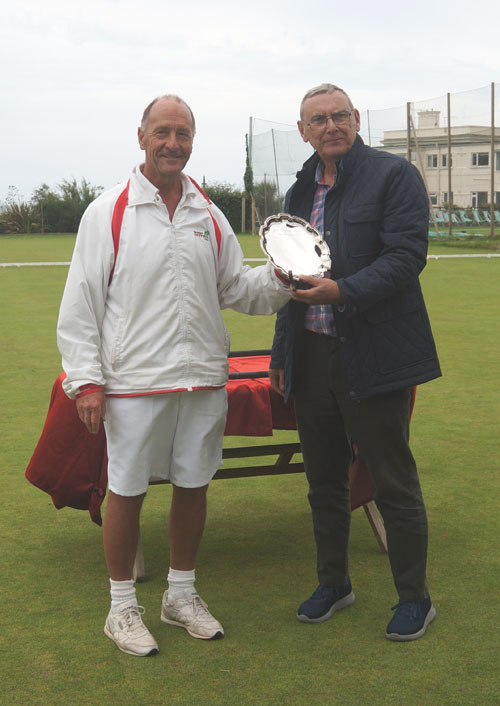 The ever-popular annual B Level Advanced Play Tournament at Sidmouth suffered a couple of late withdrawals due to due to illness and/or injury. Consequently, thirteen fellows and one lady reported on Thursday morning for the Three-Day Event. The sun shone.

Play went as planned on Thursday with all games played and no clear winner emerging. However, the forecast for Friday was accompanied by a Yellow Warning for high winds and rain. Even the most optimistic optimist would have been seriously challenged to be sanguine about the next day's play; let alone seasoned, cynical croquet players.

Thus, Friday dawned after heavy rainfall overnight and the Met Office's radar showing unremitting black clouds all day. Nothing daunted, the non-playing manager [Julie Horsley] sent the players forth and games were duly completed. Lunchtime saw many players walking about barefoot having loaded any available radiator with socks in the forlorn hope that trench foot could be avoided. Keith Ross' cunning plan to bring spare, dry socks was thwarted when he retrieved them from his waterproof jacket pocket to discover 'waterproof' aint necessarily so.

As predicted the rain continued unabated and even got worse but, once again, the manager sent our heroes forth and amazingly all scheduled games bar one was completed. Oh, frabjous joy for Chris Donovan and Keith Pound scheduled for a bye / Egyptian who very quickly declined to play. Keith Pound wrung out his socks and asked about trainer availability in Sidmouth; Chris headed straight for Mountain Warehouse's sale and bought new waterproof trousers and an 'extreme weather' jacket'. [Other wet weather stores are available!!]. The third games of the day were abandoned and entrants canoed home.

As is so often the case, the following day dawned with blue skies and warm weather and all was right with the world. All games scheduled were completed with slightly reduced timing but at no detriment to the outcome.

The final was between Robert Upton (Dyffryn / Nailsea CC's) [3.5] and Keith Pound (High Wycombe CC) [1.5] on his first visit to Sidmouth. It was a one-sided game in the greater part. Robert, ignoring all accepted wisdom and practice played straight for hoop one; blobbed it and stuck in the jaws. Then he failed to hit it with his second shot! [Thus, dear reader the cautions re hoop 1 stand]

Now Keith managed to roquet it with his second ball (and at that, a very fortunate bounce off the wire) but was unable to capitalise on it. [Well, maybe there are exceptions] From there on Robert made an almost faultless turn to 4-back and Keith could not hit in, having done so throughout the rest of the tournament. With Keith still on Hoop 1 with one ball Robert was on 'peg & peg' but missed the peg-out with his first ball. This let Keith progress cautiously and now Robert could not hit-in. Eventually a missed 2 back hoop let Robert in and he pegged out with 20 seconds left on the clock.

Richard Way is still pondering the equity of the final sentence on the law on 'lift when not entitled'; Ian Friedlander attacked his own leg with his mallet and had an impressive blood stained trouser leg; Des Honey had a very character building three days and Wendy Dominguez caused dismay with her prowess, particularly hitting-in and was awarded 'the Ladies Prize' of a bottle of wine.

It was an interesting three days rounded off by Peter Nelson, Sidmouth Croquet Club Chairman, presenting the trophies and thanking all involved in putting on the tournament.