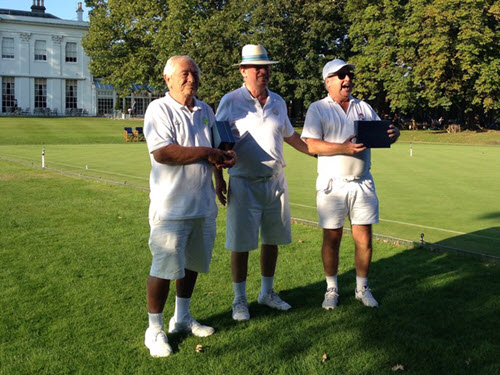 32 players from all over the South of England, including 8 couples (though they didn't all play with each other!), contested our popular annual handicap doubles one day event, on bank holiday Monday. Three games in four blocks of four were played in the morning, to find the eight winners for the afternoon knockout. The remaining eight pairs entered a progressive Swiss, with further pairs exiting the knockout also joining the Swiss and bringing in their results to date. As ever in handicap play extra turns played their part and levelled the field, all having a chance. Many morning games went to the 13th hoop, a bit of a nightmare for the manager trying to keep everyone to time and cutting into the time available for lunch; so too in the afternoon knockout where most of the quarter and semi-finals were closely contested.

The final in contrast was relatively easy for winners Mike Huxley and Gavin Taylor (Guildford & Godalming and Surbiton). They beat John Mariner and Karen Jones (Chelmsford) 7-3, both taking away appropriate Hurlingham glassware. The consolation Swiss ended as a play-off between Jason Carley (Watford) and Louise Taylor (Merton) (4 wins) and John and Freda Knight (Reigate Priory), the latter winning convincingly and ending with 5 wins to earn bottles of wine. Linda Gavigan and Fran Box (Sussex County) came second equal in the Swiss on four out of six wins. Everyone had a really good day although high temperatures meant that players needed to consume large quantities of water and carefully searched out every scrap of shade on the lawns.