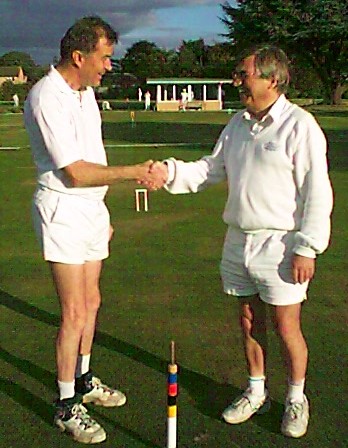 Bristol turned up a team including a player who realised at the last minutes that they had already played for Cheltenham in an earlier round.

Martin Murray was drafted in and dashed up the motorway. Martin thought he was only marginally more legal than Louise as he is on perscribed Beta-blockers.

Bristol took the lead 2-1 after the first round of games.

Shot of the day belonged to Kibble. Clarke TPOed Kibble. Kibble made a squeeze. Clarke played a ball into corner 4 and then Kibble ran 1 and 2 in the same stroke finishing with reasonable rush on Chris's other ball to hoop 3! However Dave was hampered after 3 and never took croquet again.

In the end Fulford and Stephenson won their games fairly comfortably with Paul clinching the title for Colchester. Minutes later Michael finished his TP after Martin had broken down on his attempt.