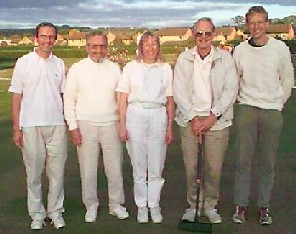 Zenmet beat Bristol in the final 4-3.

"Where do you come from?" This is the usual question once fellow croquet players realise they have just met the Zenmet Team. Our arrival at Cheltenham for the Longman Club Team Cup Final's weekend on the 5th & 6th October proved no exception. Zenmet is the joint match playing team made up from The Croquet Section of the agribusiness company Syngenta, formally Zeneca, at Jealott's Hill Research Station near Bracknell, and the Met Office Croquet Club based in Bracknell. The association of the two clubs has been a long one with the Met Office Club hiring the Jealott's Hill Lawn for matches before the formal merging of the club a few years ago when the Zenmet team was formed. We have just one lawn and a wooden hut but from our lawn on a sunny evening we are often privileged to watch wonderful sunsets from our high vantage point at Jealott's Hill.

Despite having only six people available to play in this tournament we were not deterred as we went off to play in the lovely garden surroundings at Reigate Priory or to enjoy the facilities at Roehampton. With each win, my problems as team captain seemed to get worse trying to find a date to fit in with our opponents and when I could field a team. But to our amazement we found ourselves in the Finals and were determined to enjoy the weekend.

We were due to do battle with Bristol, Bury and Letchworth over the weekend. On the Saturday we played Bury, winning 6-1 and on the Sunday Bristol and Zenmet fought it out in the final. Possibly nerves got to several of us as no one pegged out in the final, and so the result could have gone either way near the end. Zenmet led 2-1 at lunch and didn't lose the lead, finishing 4-3, despite Bristol managing to come back from the same position against Letchworth in the semi-final. Our star players over the weekend were David Moseley who won all 4 of his games, and Dennis Baker who won 3 of his.

The weekend was very enjoyable with the matches being played in a friendly atmosphere. We enjoyed the excellent hospitality of the Cheltenham Club, especially in the catering department. A few of us had time to glimpse some of the top players in the Inter-Club Championship being played on adjacent lawns, including Robert Fulford and Chris Clarke.

After our victory in the Longman Cup, the Zenmet Team is now hoping to play in competitions for one more year and perhaps even defend our title. But with the relocation of the Met Office to Exeter next summer and autumn, the majority of the players will be moving to Devon. So perhaps our entry will ask if we can play in the West region! But those of us that are moving hope very much that we are leaving a thriving Croquet Section behind at Jealott's Hill after enjoying many happy hours of croquet there.