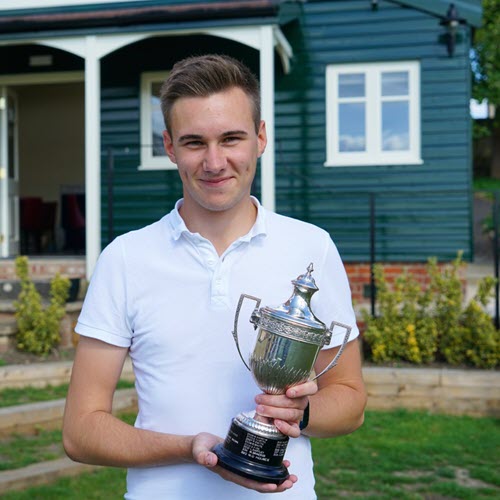 It had been several years since Bath had last hosted a CA Association Croquet tournament, which may have gone some way to explain the demand from players as well as the enthusiasm of the Bath members for this tournament.

The players were split into two blocks of eight, with handicaps in a very narrow range from -0.5 to 0.5. In order to allow an earlier finish on the final day, the manager proposed completing the seven rounds of block games over the first two days, leaving only the semi-finals and final to play on the Sunday.

Andrew Killick and Callum Johnson were undefeated at the end of Day 1 and lead Block A. Block B was proving more competitive, which may be why the games were typically taking longer to finish.

In order to keep to his ambitious schedule, the manager cut time limits on Day 2 from 3 hours to 2.5 hours. Play continued until dusk on Day 2 and three of the final round of block games still had to be pegged down overnight.

Andrew Killick and Peter Moore made an early start on Sunday in order to complete their game. Sadly for Andrew, Peter was victorious, which meant that it was Chris O'Byrne who grabbed the last semi-final spot with Andrew just missing out.

Callum Johnson had continued his good form and was the runaway winner of Block A with a 100% record. Gary Bennett was his opponent in the semi-final but it was Callum who notched up yet another swift victory, this time with a straight triple peel.

David Warhurst had topped Block B with six wins and his consistency and good shooting was enough to beat Chris O'Byrne in the other semi-final.

So, it was David and Callum, Yorkshire teammates, who met in the final. Callum's impressive play and excellent shooting continued and he gave David little chance in the final. A failed rover peel, which would have completed yet another triple, did give David a glimmer of hope but by then it was too late and Callum was able to secure victory shortly afterwards, hitting the peg from the boundary.

Callum's nine wins from nine games earned him a two-step handicap reduction to -0.5 and it was clear to everyone that this is a player who will soon be playing at the highest level. A short presentation followed during which the manager thanked the Bath members that had helped prepare the lawns as well as the excellent lunches served in Bath's brand new clubhouse.