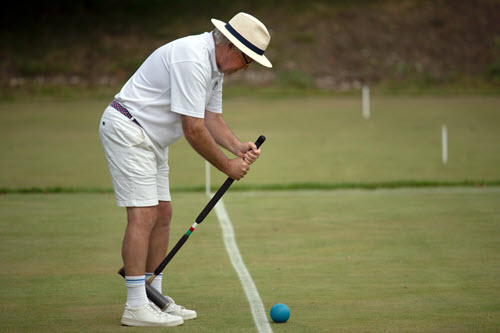 Phyllis Court stage another come-back to reach to National Final Phyllis Court reached the National Inter-Club Final on Saturday with an impressive come-back at the end of a nine-and-a-half-hour marathon match with Roehampton.

They won this long-awaited semi-final 4-3 and will now host the holders Nottingham, a team laced with international stars, in the Final at Phyllis Court on Saturday 28 September.

Reprising the style of their recent Federation League title win over Winchester, Phyllis Court showed great spirit and belief in chasing a cause that looked lost before another dramatic turnaround in the last two games.

Play in the morning's doubles match between the numbers 1 and 2 players was very slow and only the first two games of the best-of-three rubber were complete in four hours before lunch was taken with the score at 1-1.

Phyllis Court's Charlie von Schmieder and Chris Roberts were cross to have let a 6-3 lead evaporate in the first game to the AC expert but GC novice duo Mark van Loon and Tim Russell to lose 6-7 but reversed that score-line in the second.

Meanwhile Roehampton had drawn first blood with David Mooney's 5-7, 4-7 defeat of Mike Fensome, and the Roger Goldring v Dan Pearson match was also halted at 1-1 for an already much delayed lunch.

After the break, the unfinished rubbers were suspended, in favour of starting the four afternoon session singles that could potentially settle the fixture.

Von Schmieder made quick work in defeating van Loon 7-2, 7-2, and not too far behind the numbers 3 and 4 head to head singles were shared with Goldring beating Mooney 7-3, 7-0 and Pearson re- levelling the match score for Roehampton with a 3-7, 4-7 win over Fensome.

In the number 2 singles, Phyllis Court's Roberts had peeled Russel through two hoops and gifted him two more by hitting his ball into the jaws of hoops for 2-7, 7-5 score lines, so that rubber headed for a third and deciding game to settle that match result.

With the overall fixture poised at 2-2, Goldring and Pearson returned to their suspended morning singes encounter and the visitor ran away with it 3-7, so all eyes fell back on the Roberts v Russell decider which the Phyllis Court captain need to win to stay in the competition.

A missed opportunity at hoop nine cost Roberts dear when he failed to jaws his ball, a tactic that would have given a significant advantage to the next hoop as well, but the gamble backfired when Russell, displaying good accuracy through the day, won that hoop and ran his ball down to in front of hoop ten. A long battle ensued at that target, with Roberts pulling out some marvellous long-distance clearances to turn that hoop to his advantage and eventually level the score at 5-5. With first approach to hoop 12, Russell re-took has one score lead and another desperate struggle took place at the penultimate hoop with Roberts not wanting to score and concede the first approach to the last hoop 13 without some sort of advantage as a counter. Reluctantly he was forced to score by Russell's intelligent manoeuvres and his angled hoop shot, whilst successful in scoring left his ball hampered with no sight of the last hoop. He decided to go for broke and sent is other ball off the north boundary so that he couldn't be cleared and would have a hop shot to win if Russell failed to convert his first scoring attempt. Russell shot wide but his second ball positioning was excellent and a sure scorer if Roberts failed. He didn't. He nailed the 7-yarder from the boundary, won the game 7-6 and Phyllis Court still lived.

Now, at a 18.45 in the evening, the fixture rested on the postponed doubles decider and, on a real high, Roberts and von Schmieder made short work of decisive game, aided by some poor fortune for van Loon, winning 7-3.

Phyllis Court duly progressed to the National Final which will be a repeat of last season's encounter with Nottingham, who have again foregone the convention of playing at a neutral venue in favour of playing at the Henley club, where the Thames riverside setting and prospect of large spectator gallery are most appealing. Scores (Phyllis Court names first):