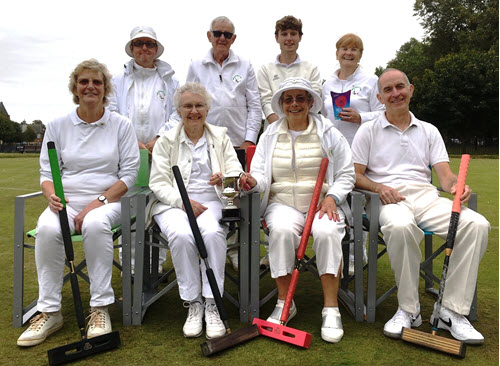 Short Croquet is strong in the north so it was no surprise that the final of this important national knockout competition featured two teams from the NW Federation. Both teams found the journey over the Pennines to York very straightforward, allowing the day to start and finish in good time.

The level York lawns played well, with both teams achieving some accurate roquets the full length of the lawn, and nine of the eleven games reaching peg-out. Bowdon got off to the strongest possible start, winning the opening doubles and singles to finish the first round 3-0 up. Bury's Richard Leach pulled one back in the second round but the result was already sealed, and by close of play Bowdon's accuracy and strength in depth had earned them a convincing 9-2 victory. Both Bury and Bowdon made the day's croquet an object lesson in friendly rivalry, positive play and excellent team spirit.

Warm thanks were expressed to York for their welcome and hospitality, and to CA representative Colin Irwin for being Bury team chauffeur, encourager in chief, and presenter of the prizes.