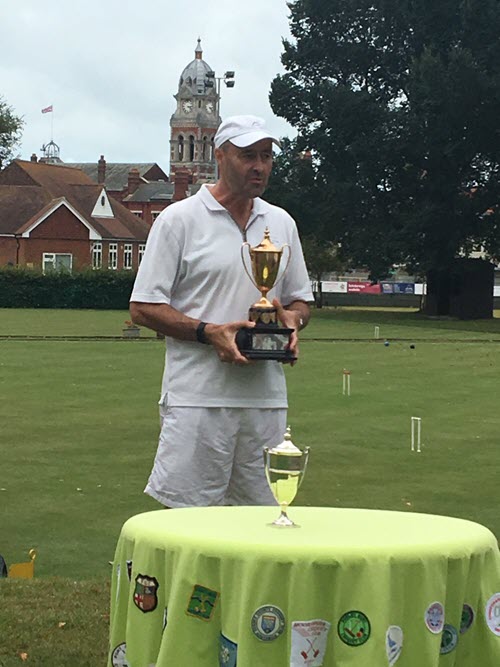 Although Friday and Saturday saw clear skies, memories of last year's rain were reinforced by dire weather predictions of thunder showers for the whole of Sunday. Fortunately, they proved to be entirely unfounded and, apart from a few drops at lunchtime, the final day remained dry if largely overcast.

From a strong field of 22 players, three of the top seeds duly made it through to the semi-finals. They were joined by unseeded Richard Smith who, having despatched fourth seed Jonathan Powe in straight games in round 2, then just scraped home against Ian Lines in a time-limited match that finished in darkness. David Maugham, having lost the first game of his quarter-final against Sam Murray despite his TPO, asserted his authority to win the match without Sam scoring another point, and then went on to beat second seed Jamie Burch in straight games to reach the final. Meanwhile Mark Avery had beaten Richard to set up a repeat of last year's final.

In game 1 Mark took blue to 3-back leaving David's balls across corner 4 (C4) and himself in C2 and C3. From the contact David made a superb take-off from C3 to rush partner to hoop 1 (H1) but, uncharacteristically, stuck. Mark missed from H2, allowing David to continue, only to miss a hampered continuation after H3. Mark, playing black, began by peeling 3-back after H5 and looked set to finish when his peelee stuck in rover and his jump attempt was faulted. David had the balls replaced, peeled blue, continued his break to 1-back and laid with the opponents closely cross-pegged, lying east-west, and himself in the centre of the west boundary with a short rush to the peg. Mark lifted black to C1, hit red and finished. Game 2 again saw Mark in first with a break to 4-back and the same leave as game 1. From the contact David laid himself a rush in C4 with blue west of H1. Mark shot and hit centre ball and also made a leave. David missed and Mark finished with a standard triple, the only player to complete the weekend without a loss.

In the plate event the top 8 players (on percentage of games won in the first two days) were drawn in a 3 round knockout played on Sunday. Here Robin Brown produced three triples to clinch the Sussex Union Cup. Full results are available on the croquetscores website.

Particular thanks go to Hilary and Tim Smith for their lunches, and to groundsman John Crisford whose devotion to the lawns continues to keep them in such good shape.

Heart-warming highlight of the weekend was undoubtedly the presence of 5-week-old Winifred, daughter of Ellen and Sam, who at this, her very first croquet tournament, charmed everyone and triggered unexpected parenting skills in a surprising number of individuals!