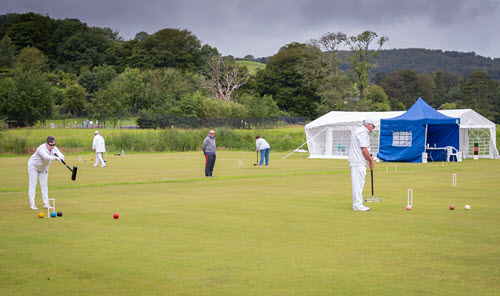 Crake Valley hosted the first GC C level qualifier of 2020 on Sunday 26th July in overcast, but mainly, dry conditions. 10 players from 4 clubs attended and played some excellent croquet on the very well presented lawns. Half the group games were won by a single hoop and were most interesting to watch.

The group stage was cross block so all players played 5 games with the top 2 in each group moving to the semi final (Round 6) stage. Half the group games were won by a single hoop and were most interesting to watch.

In the semi finals Sandra beat Phil on the 13th hoop whilst Frank eased past John 7-1.

In the final it was evenly contested with Sandra coming out successful 7-5. Sandra qualifies to play at the National Finals in Colchester mid September.

Picture shows Sandra Cornes (left) and others in action at Crake C level.