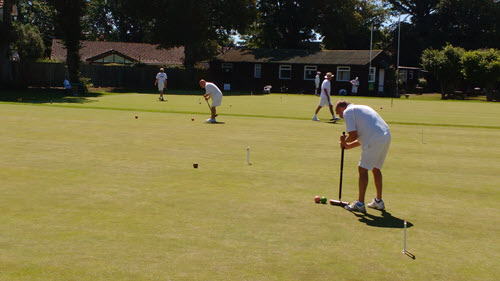 A gala of croquet at Southwick on Wednesday and Thursday with players in five different competitions in AC and GC, played under clear blue skies, as is always the case in Shoreham of course.

12 players competed on Wednesday and Thursday for the A class Abbey Challenge Cup, one of Sussex's more impressive pieces of silverware, and for the B class Scott Cup.

With limited numbers this year the Abbey Challenge was played in a flexible format to give the players as many games as they wished over the two days and were by and large left to their own devices by the manager: an American block as the basis, interspersed and followed by additional flexible Swiss games. Joel Taylor came fired up from the Eastern Championships and took the cup with 7/9 wins from nearest rivals Chris Coull and Chris O'Byrne. Congratulations to Joel.

Most notable performance was probably from veteran Paul Castell who beat Chris O'Byne +14otp in what Chris described as 'brilliant play' and 'amazing'. Paul went on to beat Chris again in the Swiss rounds.

The competition for the Scott Cup was a 5 match block which was won by Liz Farrow, with 4/5 wins. Congratulations to her. Chris Rolph won his Silver Medal with an all round break against David H Boyd, taking the game +3. Well done to Chris. David also made an all round break of 12 in the same game but alas ......

The three GC competitions were all single day events. 12 players competed for the Jellicorse Cup (A class) in two blocks with a single play-off round. The cup was won by Richard Brooks who beat Ian Shore 7-2. Congratulations to Richard. The B class competition followed on Thursday and was in the same format; it was won by Stephen Hayns who beat Frances Low 7-6 in the final round. Congratulations to Stephen.

Unfortunately the original Covid restrictions only allowed us to have space for one block in the C class event. Nonetheless the six players had lawns 3 and 6 to themselves; Diana Langridge and John Knight both ended with 4 wins each; although Diana had beaten John, he had the better net score and so took the cup - not the Isaacs trophy as advertised but our open competition Daldy Cup which has been out of use for some time.

As recommended there was no manager's table or office and results were sent by text to the manager who uploaded them immediately to CroquetScores so they could be seen and checked, a system that worked very well. Everyone complied very well with the Covid restrictions on distancing etc and I am sure the croquet balls, carriers etc at Southwick have never been so clean. It is a shame there could be no catering, and we missed the Sussex beer. Still, the lawns played beautifully.