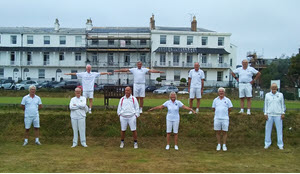 Sidmouth Croquet Club decided to go ahead with the ever-popular August B-Level event but with some modification. Thus, a format that simplified Covid-19 restriction compliance took-up 3 lawns not 4 over a 2-day event, rather than 3, which also placated members' angst about reduced play opportunities being further reduced by tournament play.

Needless to say, the heatwave of the previous few weeks had given way to uncertain weather at best and, just as last year, yellow warnings of torrential rain with possible flooding were in issue. Play started on Friday in a heavy sea mist which was later enhanced with determined mizzle [a contraction of Mist / Drizzle?]. Nonetheless, the 10 players sallied forth and attacked the lawns with gusto.

Come lunchtime on Friday and the players were, once again, experiencing the drawback of waterproofs in a high humidity atmosphere. Yes, breathable fabric does breathe, some better than others, but not with sufficient efficiency to curtail the uncomfortable over-heating with perspiration. The joys of summer sport!

Play continued into the evening as a fourth 2.5 hour game was scheduled for a start with completion time-tabled for the Saturday second slot. Saturday dawned with another heavy sea mist but no mizzle, yet. Competitors were in high spirits with each trying to outdo the other with the usual stories of unbelievable bad luck, the rain effect and so on. Your reporter was only mildly surprised that the problem of the thunderous noise caused by the bees collecting pollen from the adjacent 'triangle' garden was not mentioned.

The cricket started so, of course, it started to rain. The cricketers all fled for shelter as usual and the square was covered. Our cricketers were quite recently accused of being wimps - they wear studded boots to prevent slipping - so, they were asked, what is the problem? Apparently, it is because after some 300 years they still have not designed a cricket ball which will retain its shape when wet. Is there an entrepreneurial opportunity here? Croquet ball materiel wrapped in a modern pseudo-leather coloured red. Fame and fortune awaits???

The final block games were concluded and the results were interesting in how many games went to time and ended without a peg-out - at B Level - I mean handicaps 1.5 to 5 - good grief. The afternoon games were play-offs for overall position with the Salver being played for between Peter Nelson [Sidmouth 1.5] and Robert Moss [Budleigh 3]. This game also went to time but had a nail-biting finish. Moss' final turn saw him make a good break to peg and a one-ball peg-out. Three balls on the lawn and Nelson needs 8 hoops, including 2 peels and a one-ball peg-out to win. Nelson hit-in and, keeping his cool, started the challenge. His first attempt at positioning the peelee ball at 4-Back saw it go wide. He persevered, with some pause for thought on how to set-up a second attempt. It was attempted but the treacherous lawn did not help and so Moss won +1 on time.

Jane Babbage [Sidmouth,] the only female entrant, presented the salver. The prize for the quickest game usually goes to a player winning in about 45-50 minutes. On Saturday it went to a player in the final with a time, achieved earlier, of 2 hours 1 minute. There was some derision, photographic evidence of acceptance of the bottle of wine was forbidden as he wished to be unrecognised. So, no names, no pack-drills, but he didn't win the salver.

Robert Moss thanked the Club and all involved in setting it up: Andrew Thomas, Ed Dolphin, Philip Harris, playing, and our excellent Tournament Manager - Julie Horsley. He also emphasised what a friendly and welcoming Club Sidmouth is - well I'd agree with that.