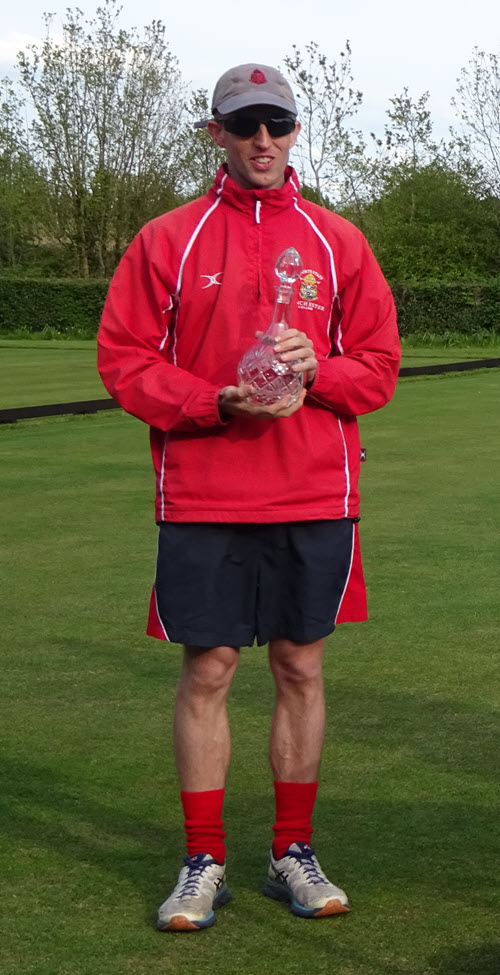 The 2021 competition was far less affected by the pandemic than last year and we had 36 heats around the country and 454 players took part in them. Consequently, 42 players came to the final, on a summery day at Surbiton, enjoying its superb lawns, fabulous food and famous hospitality.

It was run as a swiss and the players were thankfully tolerant of the manager's occasional slip-ups. Having in the field four Richards, four Johns, two Colins and two Anthonys caused some confusion. Perhaps next year I should put the clock back a few decades and refer to everybody as Mr Andrews, Mrs Brown, etc!

At lunchtime we had a 'cut': putting the fourteen players with no more than one loss into one section, to compete for the main prizes, and keeping the remainder in a different section to play for a 'Best of the Rest' prize. Incredibly, this year's top section was all-male. We usually have several women doing well and in recent years three ladies have won the final.

So, in the the afternoon, I set about whittling down the fourteen and in due course I was down to four, all on 6/7. The four were very different in their profiles:
Peter Dowd (Compton) is a top-flight GC player (ranked 19th in the UK), playing off -3. He hits the ball at a million miles an hour, with formidable accuracy.
Colin Groves (Woking) is a well-rounded AC player with good 'touch'. He again played above his 6 handicap on this visit to the OB Final (he was runner-up last year).
Simon Kewley (Lym Valley) is very new to croquet and plays off the maximum 20 handicap. He clearly has a natural flair for the game and used his forest of bisques to good effect.
Joel Taylor (High Wycombe) is a top-flight player in both AC (with a 31st UK ranking) and in GC (25th in the UK) but had to play off a OB handicap of -5.

In the first semi-final between the top two above, it came down to Peter's last stroke. He completed rover but then had to hit back through the hope in an attempt to either hit the peg or Colin's ball lurking a yard from it. He missed both and Colin went through to the final. The second semi-final was a fascinating battle in which Simon had 8.5 bisques, which is massive in a game of one-ball with twelve hoops to make. So Joel's plan was to hit in and take a break round to the peg. Although he did not achieve a finishing break, Joel did hit in several times and made two or three shorter breaks to put the game beyond doubt.

In the final Joel found Colin a more canny opponent and the game developed into a tactical battle, but Colin's four bisques were not quite enough to counter Joel's accuracy. So, Joel won the traditional engraved crystal decanter and Colin now has a pair of runner-up goblets.

Meanwhile, in the rest of the field, we had three players unbeaten after lunch: John Rowley (Cammerton), Richard Andrews (Hurlingham) and Richard Jelly (Bath). In the next round John lost and so the battle between the two Richards became the Best of the Rest Final. With both players for the peg, it was Richard Andrews who hit first, to earn a crystal goblet.

The manager's prize for the best break was interesting. Mark Ormerod (Dulwich) completed two eleven-hoop breaks and in one of them contrived to still lose the game. This is what can happen when you are playing off -6....

It was heartening that many of those with no pretensions to the prizes kept returning to the manager's desk to seek another game, just for the love of playing. Some notched up ten or eleven during the day.

This year's charity, chosen by a vote among the heat organisers was the British Heart Foundation. Again this year, several records were broken. Foremost among these was the £7,658 (including Gift Aid) raised for the charity. This increased the total raised in all Charity One-Balls to over £54,000. Budleigh broke the previous record for the number of participants in their heat (56!) and, with £710, also but briefly held the record for the most money raised in one heat. However, a few days later Watford surpassed that with a magnificent £1050.

While these are dizzying numbers, this competition is equally important to small, one or two lawn clubs up and down the country, who have a seasonal pipe-opener with about eight players and send us a £50 cheque and a player in the final. Not least, OB brings together AC and GC players. The Charity One-Ball Championship is and will remain an early-season fun event, open to all.