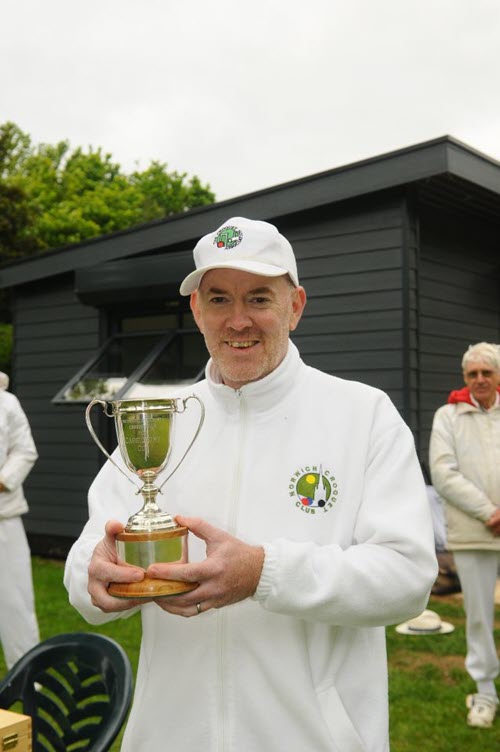 It was a chilly day that saw the arrival of a strong entry for the second 2-day
AC Midweek Advanced tournament to be staged at Watford, after the cancellation
of the 2020 event. It was also the first to be able to take advantage of the
new pavilion, albeit in a socially distanced way that still required food and
beverages to be consumed al fresco outdoors.

The entry was split by handicap into two independent blocks, with the winners
in each block determined by the highest percentage from a minimum of 5 games.
In the 'A' block Sam Murray proved to be on top form, stamping his mark in the
first round with a tpo and following up with two more tps in his next five
games to win the tournament and the Cassiobury Cup with a 100% record. Stephen
Wright also played well, showing some of the form from his heyday some decades
earlier, and his only defeat was at the hands of Sam.

Unfortunately in the 'B' block one of the entrants had cancelled at short
notice the day before to leave an odd number of players on the first day, but
Geoff Johnson was co-opted to stand in to play on the second day to even up the
numbers. The pace was also somewhat slower in this block with a couple of games
that dragged on for over 4 hours, requiring the imposition of time-limits. So
nobody in the block managed to play more than 3 games on the first day, and
some only managed two. Brian Havill had emerged as the overnight leader with
3/3, including a narrow win over Richard Peperell, but was unable to capitalise
on that on the second day, losing both his games. Meanwhile Richard Peperell won
both his last two to overhaul Brian and take the 'B' block title and the
Cassiobury Salver with 4/5 in spite of his loss to Brian on the first day.
The weather deteriorated further in mid-afternoon of the second day, and reached
the point where there was no enthusiasm from any of the players to carry on, and
as the outcome had by then been determined the final round of play in both
blocks was abandoned.

*Geoff Johnson was a late stand-in playing on the second day only, after one of the original entrants
in block B withdrew at short notice because of injury.