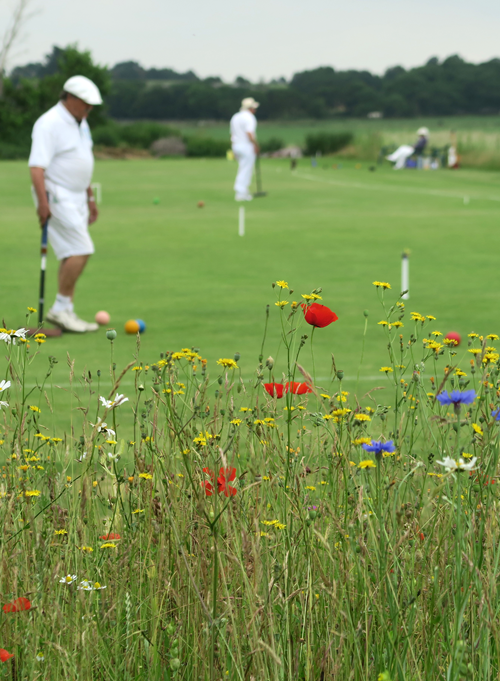 Lionel Tibble and Gary Bennett were the winners at the Wrest Park July Advanced tournament.

The overall winner was Lionel Tibble with seven wins from eight games, with Gary Bennett winning the prize for the most index points gained amongst the players of handicap 1 and above. There were TPs by Omied Hallam and David Marsh, both at Nick Steiner's expense. Jack Wicks played on Friday, replaced by Bryan Harral on Saturday. Rod Ashwell didn't play on Sunday, so an even number was maintained throughout.

With six minus players, four of handicap 1 and four at 2 and above, there were occasions over the three days when players from the different groups played each other and also when players within the same group played each other twice. The tournament was decided by one of the former: Lionel Tibble v George Collin. George, for rover, had hit both lift shots and pegged Lionel out. He took off to corner 2 leaving a perfect rush and a single ball target. Lionel, near hoop 4 and for 4-back, hit and finished on a two-ball break.

The weather was fine for the most part, but a heavy shower on Sunday afternoon had the players socially undistanced as they all took shelter under the courtside gazebo. Our thanks to Eric Audsley for management and to Eric, George and John for giving the lawns another cut after play on Saturday.

This tournament was advertised as an A and B level tournament. Whereas in GC A, B and C levels are fixed, B level in AC appears to mean anything the club chooses, be it 0, 1 or 2 (not forgetting the Super B variant). Is there a case for standardising the various AC levels as in GC? One for the Tournament Committee.