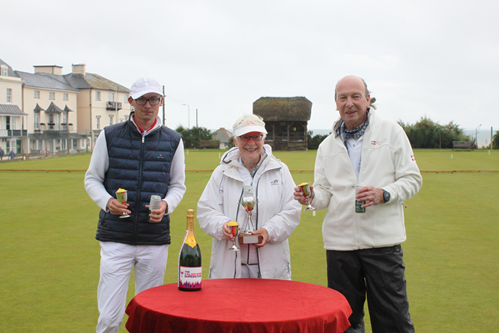 The weekend of 10th/11th July saw eight teams consisting of three players each gather at Sidmouth Croquet Club for the inaugural event of the Sidmouth GC Team Challenge. Players came from a variety of clubs from around the UK, including Southwick, Hamptworth, East Dorset, Ryde (Isle of Wight), Nailsea and Long Eaton, to name but a few, and of course Sidmouth CC entered a local team consisting of Philip Harris, Steve Pearson and Paul Bradley.

The event is loosely based upon the GC Intercounties format with an "all play all" points race, with matches consisting of one doubles (worth 15 points) and one singles (worth 10 points) game against the opposition. On day one, "Strangers on the Shore", a team consisting of Peter Balchin (Glamorgan), Chris Jackson (Long Eaton) and Debra Hayns (Ryde) got off to an early head start, winning both their opening doubles and singles games, 7/4, 7/5.

In the early matches of the tournament The "IoW Strollers", Roy Tillcock, Pam Sim and Steve Hayns kept apace with "Strangers on the Shore", a double win over the home "Sidmouth" team (doubles 7/6, singles 7/5), helped gain a maximum score in the points race.

Each team had a Joker card chosen at random at the beginning of the day, which gave them the opportunity to gain a further 5 points on a game of their choice within a specific round. Team "Smith & Broomstick", Stuart M. Smith (Sidmouth), Richard Carline (Southwick) and Janet Trueman (Hamptworth) capitalized on their Joker which was allocated to them to use in round 7. They gambled on Stuart Smith winning the singles match which, as this was the " Captain's Choice" round, turned out to be against Steve Leonard from the "Len & Jenks" team. The game finished 7/5 to Smith, and gained a valuable extra 5 points, with Richard Carline and Janet Trueman ("Smith & Broomstick") also wining the doubles match 7/4 over Michelle Leonard and Richard Jenkins ("Len & Jenks").

Joker win gambles also paid off for the "IoW Strollers" in round 3 with a singles win for Roy Tillcock over Peter Balchin, of "Strangers on the Shore" at 7/4. The "J Arthurs" team, Ryan Cabble and Mike Powell (Nailsea), won their Joker match on a doubles game 7/6 over "Strangers on the Shore" Peter Balchin and Debra Hayns. The home team Sidmouth won their Joker round on the singles match in round 5 which ended at 7/5 to Steve Pearson over Richard Carline (Smith & Broomstick).

In round 7, each team knew their opposition but not which players were playing in the doubles or singles matches - with this choice left to the team Captains to decide. Sidmouth wisely played their comfortable pairing of Philip Harris and Steve Pearson in the doubles, who won their game against

By the close of day one "The Three Amigos", Aston Wade (Hamptworth), Peter Chadwick (Budleigh) and Glynis Davies (Northampton) had gained a slim lead of just 20pts over "Strangers on the Shore", with five other teams still very much in contention. Only "The Saints" (Les and Viv Heard and Steve Foster, Northampton) were a lagging a little behind on 50 points, with rest of the teams on between 80 and 125 points as the tournament entered day two. But, there were a further 180 points still to play for.

On day two, the teams played each other again, but in a different combination of players for the doubles and singles games. The opening singles game for the leaders "The Three Amigos" was a high level display of skill, accuracy and tactics, which placed Aston Wade up against Stuart M. Smith from the "Smith and Broomstick" team. A great match, but on this occasion the recently crowned Open Singles Champion, Aston, was beaten by the forthcoming England Team Captain, Stuart. Both of these players lost only one singles match each throughout the whole event.

However, they were not alone in that achievement, with Paul Bradley (Sidmouth), Chris Jackson (Strangers on the Shore), Neil Fillery (J.Arthurs), Ryan Cabble (J.Arthurs), Glynis Davies (Three Amigos), Roy Tillcock (IoW Strollers), and Steve Foster (The Saints), all only dropping one singles game each.

As day two progressed it became a two horse race between "The Three Amigos" and "Len & Jenks" for the top spot. "Len and Jenks" consisting of Steve and Michelle Leonard from Winterbourne Valley, and Richard Jenkins from Hamptworth, had hovered mid table, but found some form on the Sunday.

Maximum points gained with both singles and doubles wins over the "IoW Strollers" and "Strangers on the Shore" in rounds 3 and 4 proved decisive.

But following quietly behind, the Sidmouth team were gathering up the points. Again, the doubles pairing of Philip Harris and Steve Pearson had a win over Ryan Cabble (Nailsea) and Neil Fillery (Taunton) from the "J. Arthurs team", 7/2, with Paul Bradley also winning the singles match against Mike Powell 7/6, gaining maximum match points of 25pts.

Unseasonal weather bought in driving rain showers for much of the afternoon, but spirits remained high. Some of the wet weather gear also raised a smile or two, notably Peter Balchin's "Homepride Fred" attire! "The Three Amigos" played their Joker on the doubles game in round 3, with Aston Wade and Glynis Davies taking on "Strangers on the Shore" (Peter Balchin & Debra Hayns), and winning comfortably 7/2, gaining a valuable extra 5 points. They also took a doubles win over the "IoW Strollers" in round 4 and the "J.Arthurs" team in round 5.

Consistent performances from "The Three Amigos" saw them draw ahead, and by the penultimate round they needed to lose both matches to tumble from the top and "Len and Jenks" needed a full set of wins to leapfrog ahead. Despite "Len & Jenks" winning the next two doubles games, "The Three Amigos" remained strong with a singles and doubles win, and became unassailable.

First place went to "The Three Amigos", Aston Wade, Peter Chadwick and Glynis Davies with 245 points, with "Len & Jenks" coming in a close second, just 20 points behind on220 points.

The Sidmouth team had been in 7th place at the close of day one, but in true tortoise and the hare style, improved their performances on the Sunday, and pipped "Strangers on the Shore" by 5 points, to take a very well deserved third place.

The trophy was presented by Peter Nelson and was a rather lucky auction find purchased by Louise Smith for the event. The Edwardian trophy depicts three mallets supporting the cup, which is rather fitting for this "team of three" tournament. Ryan Cabble generously donated a magnum of champagne that was eagerly accepted by Aston, and Peter took home the Gin & Tonic!

Everyone enjoyed the tournament, despite the weather, and the format of mixing teams with participants of different handicaps and abilities proved very successful, and an invaluable experience for many of the players. We hope this is the start of an exciting new team event within the croquet tournament calendar.