Brits practically clean up in Florida 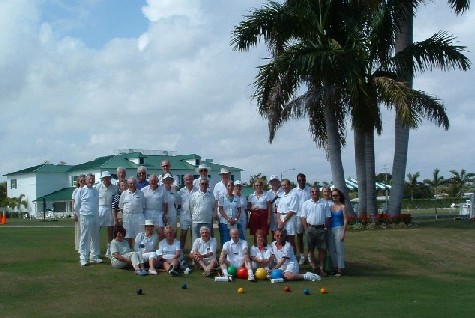 40 players from the UK were joined by 19 from N. America for this eight day tournament at the new National Croquet Center, at Palm Beach Florida.

The Brits were looking for a croquet-based holiday in the sun, and certainly got that. On the first day the temperature reached 85oF, but then a cold front crossed Florida and it dropped to 75oF!

The NCC itself is a magnificent club. It has twelve superb laser-levelled lawns, though their sand base and nightly watering makes for easy conditions, and especially easy hoop-running. The 'Posh Hut', as we called it, is every bit as comfortable as Hurlingham's.

However, we were there not only for the weather, the food and drink and the sightseeing. We went to play croquet. There were three events: Handicap Singles, Handicap Doubles and the four Level Class-divisions.

The Handicap Singles was run as a flexible swiss, in which players completed up to eight games. The top two went into the final. These were Jolyon Kay (Blewbury), with 5/5, and Dick Knapp (Surbiton, Roehampton and the NCC), with 7/8. Dick won the final on Sunday to collect the first pewter salver prize.

In the Handicap Doubles we encouraged Brits not to pair-up with each other, but to make themselves available to partner local Americans, some of whom had never before played Association or 'International Rules'. This worked well and our hosts were very grateful for the opportunity. Indeed, many were converted to the attractions of our "more interesting game". Again, a swiss yielded two finalists, with Mike Jenner (Chicago) & Deidre Duggan (Bristol) vs Louis Nel (Canada) & David Clarke (Sidmouth). Mike's skill and Deidre's consistency overcame Louis and David's challenge.

Two of the doubles finalists were also in the class event finals: Mike Jenner and David Clarke, the latter being beaten by John Kennedy
(Beverley) in the 'C'. The 'D' was won by Geoff Young (Bury) from Phil Terry (Middlesbrough) and the 'B' by Alan Newman (Plymouth) from Peter Quinn (Hurlingham and Surbiton).

In the Open Championship our nine 'A-class hackers' were joined by seven N. American players, the best of which was Jeff Soo. Unfortunately, Jeff missed the semi-finals owing to his being at the wrong end of a three-way tie in his block, but he demonstrated his skills with five triples in his eight games. Samir Patel (Surbiton) also completed four triples in the tournament (but usually lost when he didn't!) and several others completed one or two.

Mike Jenner played his fellow American Stewart Jackson (NCC) in one semi-final, with Mike winning a lengthy and very close battle 2-1. In the other Louis Nel was beaten by the sole remaining Brit, Ian Plummer (Oxford and Surbiton), whose game has seemingly been revitalised by a new mallet. Mike beat Ian in an absorbing final -17, +6, +4.

It was clear to us that some of the top American rules players, such as Mike and Stewart, could become very good at Association once they have more experience. They generally don't try triples and have to work out some tactics - such as what to do when one-ball is pegged-out - from first principles.

Most of the Brits flew back to Gatwick on Tuesday morning, where the temperature was -6oC. Roll on our summer.