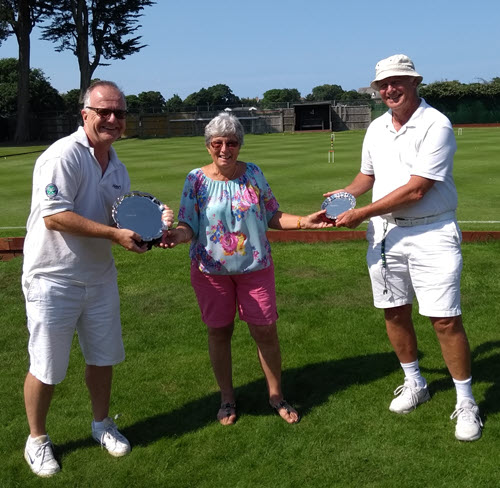 Day 1 started with a reduced entry of 8 players from 6 Clubs (including 2 from Hunstanton) using an all-play-all format twice over the two days. At the end of Saturday, 8 rounds had been played, with the hope of an early departure on Sunday. The overnight position left John Hague and John Gosden on 7 wins each. John Hague having dropped a game to John Gosden and John Gosden having dropped a game to Chris Jackson. The score line does not adequately reflect the performance of Susan Boxell who joined at the last minute to prevent players having to sit-out a round. She played above her handicap of 11 narrowly missing out on the thirteenth hoop in a couple of games. Day 2 started with a further reduction in numbers by reason of 2 enforced medical withdrawals (Desmond Jarrett & Susan Boxell). The remaining 6 players completed the scheduled rounds in extremely hot conditions, with some closely contested games. The final positions were decided by the number of wins and net hoops as follows: 1st John Hague, 2nd John Gosden, 3rd Chris Jackson, 4th Mike Bilton, 5th Bridget Goodman & 6th David Boxell. The full results are available on croquet scores at: https://croquetscores.com/2021/gc/hunstanton-a-level-series-0. The players expressed their appreciation of the work put in by everyone to make the event so enjoyable.