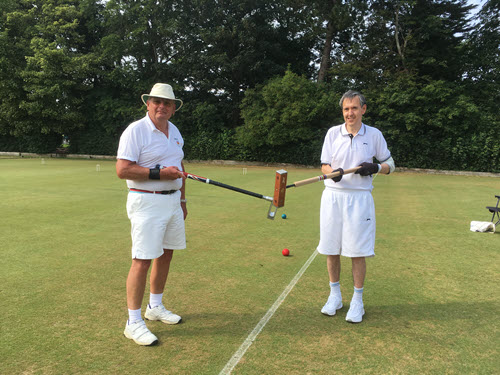 This tournament exceeded all expectations. The weather was wonderful after dire warnings of flash floods and lightning from the Met Office. The upper class of eight were competing for the Peter Dyke Ruby Shield. This is a new trophy commissioned to celebrate the 40th anniversary of the founding of the club by Peter Dyke. Peter's first action in 1981 was to go round the pubs in Nailsea selling raffle tickets. For many years he single-handedly coached, refereed, handicapped, set hoops, laid out lawns, managed tournaments and internal competitions and generally ran the club. He has also coached many Juniors who have gone on to become top class players.

The tournament played out as a fitting tribute to Peter's efforts. From the two blocks of four, semi-finalists Chris Donovan, Peter Kirby, Jonathan Lambton and Robert Upton emerged. It was Chris and Peter who won through to give us the most entertaining Nailsea final for a very long time. The hoops were accurately set to 1/16 but, as one expects at Nailsea, they were rigid and not very friendly. The players soon learned not to expect to run them from angles or to bully them. Chris and Peter were both playing accurate breaks but had occasional hoop failures with much muttering from Chris about the hoop-setters. There was a good crowd, all thoroughly enjoying the entertainment. Chris reached 4-back and peg with Peter some way behind. When Peter proceeded beyond 4-back, we expected a contact concession and a pegging out of Chris's red ball. Sure enough, red was positioned very close to the peg. Peter played a take-off from the east boundary to get close to red. There was a gasp as he hit the peg instead! This left him with one ball on hoop 5. He battled on, running hard through hoop 5 to reach red and yellow on the north boundary. It was a gallant effort but came to nought in the end and Chris won +7. Peter Dyke was there to present the shield and must have been pleased to see such a fitting Final. Peter was then presented with a small replica of the shield as a keepsake. Meanwhile his three grand-daughters played on the grass where his daughters had played in 1981.

In the higher handicap class, there were 6 players in an American block. This class didn't disappoint the crowd either. Harvey Smith, aged 14, and handicap 11, took the first game to get to grips with the hoops and lost -2T to Margo Soakell. He then started to fly and won all his remaining games. With a beautiful swing and accurate croquet strokes, he is surely destined for great things. His delightful personality will win him many fans. Joint second in this class were Neil Fillery and Libby Howard-Blood, on 3 wins each