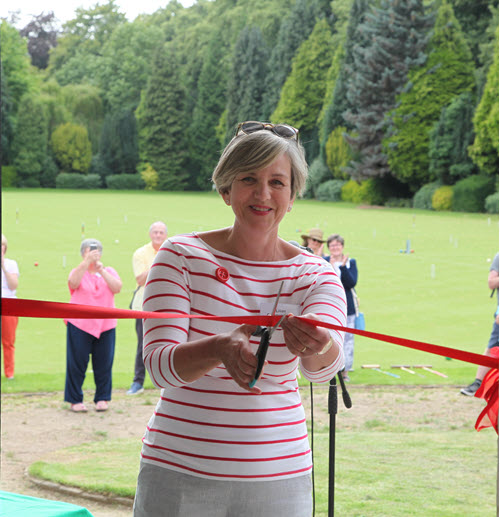 by Beatrice McGlen at Nottingham
27th July 2021 (Other News)

The MP for Nottingham South, Lilian Greenwood, performed the official opening of the newly refurbished pavilions and 4 new croquet lawns at Nottingham Croquet Club on Saturday 24th July. In front of an assembled crowd of nearly 80 invited guests and club members, Lilian cut the red ribbon after delivering what was clearly a carefully researched, entertaining and apposite speech. She later posted on her Twitter account "Such a pleasure to be invited to open Nottingham Croquet Club's improved lawns and pavilion at Highfields Park today. Forget everything you think you know about croquet: it's accessible, fun & for everyone from 8-80."

The invited guests included representatives from some of the grant funding bodies and other donors who had made this large project possible, along with leaders of various community groups who are now able to take advantage of the improved facilities.

Guests enjoyed a pleasantly warm afternoon playing croquet skittles, ricochet and racing croquet on the new lawns before sitting down to a splendid afternoon tea prepared by club members. This is the first time the new lawns have been used and, although not yet up to tournament standard, they are progressing well and will be fabulous next season.