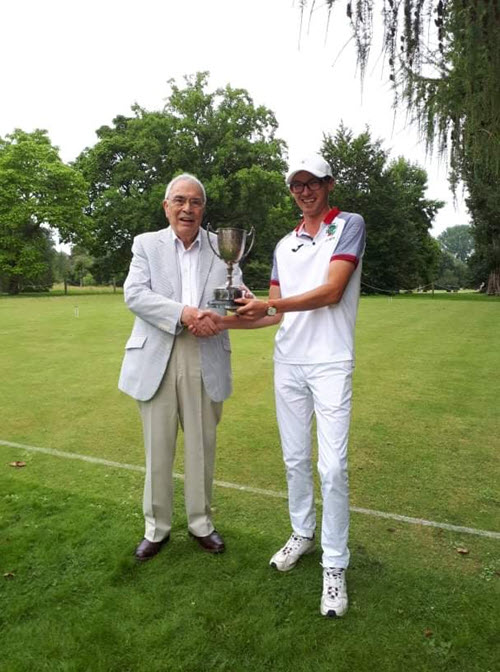 The AC Student Championships have been played! The winner of the singles was the extremely talented Aston Wade of The University of Exeter, and the doubles was won by the University of Oxford team, Harry Anderton and Nick Orr.

This year we had 4 entries into the doubles tournament, two from the University of Cambridge, one from the Imperial College London and one from the University of Oxford, and 8 entries into the singles, with students coming from The University of Cambridge, of Oxford, of Exeter and Imperial College London. The entrants were a real mix, with people from all sorts of different courses, from Medieval History to Finance-and-Accounting to Physics. We had a range of ages also, with postgraduates just finishing off their theses and first year undergraduates playing. The spread wasn't only in academic level and area, but in croquet experience and ability too. With Aston playing off of scratch and Kai Kirchoff, one half of the Imperial College London doubles team, playing AC for pretty much the first time in his life: we then had a whole spread of handicaps in between.

In both competitions, all games were played as level advanced games. We ran the doubles event as a knockout tournament with a third-place playoff and the singles tournament as a Swizz tournament, trying to get as many games as we could into one weekend. Ian Plummer, the Oxford coach, has a website which offered the perfect tournament manager for this.

With a selection of bananas, Walkers crisps and Pimm's and lemonade on the side for the competitors, we started playing on Saturday morning. Pretty much everyone was playing all the time. Between games people would talk about tactics and even get a bit of coaching from more experienced players. That is testament to the atmosphere of the event. One of camaraderie, where people could meet other university age croquet players and would try to help each other improve.

The social that evening gave everyone the chance to get to know each other a little more than the day, with all competitors going for a pub meal at the local for the Oxford players, The Royal Oak, and then going on to a few more pubs in Oxford's centre. Competitors all split off to their respective accommodations throughout the night. Whether bunking with an Oxford student, getting accommodation in an Oxford college or staying in a local Airbnb.

We met up again bright and early, with a few a bit worse for wear, on Sunday morning to play the finals. While these games were played other players took the opportunity to play a few casual games with one another. This gave some of the greener AC players the chance to play some handicap games against one another, which was a nice way to ease the trial by fire they had had the day before, playing level advanced games.

In the singles final we had Mark Baker, Oxford, playing against the unbeaten Aston Wade, Exeter. It was a good game, but as throughout the competition, Aston gave away very few chances for his opponent to make a break. Mark managed to get one in despite this, playing around to four-back with his first ball and leaving a good diagonal spread, but Aston got back in and played to peg over the following turns.

The doubles final was played between Harry Anderton and Nick Orr of Oxford, and Finn Sutcliffe and Lachlan Chavasse of Cambridge. All of these players were meeting each other for a second time, after the Oxford-Cambridge varsity match, which gave it a nice air of friendly, but fierce, competition. The game was a good one, with all players making breaks from tricky situations. In the end Oxford won on time, up by 9 hoops.

After the games had all finished, we had a small presentation of the trophies, with the president of the CA, Quiller Barret, present to say a few words. OUACC would like to thank Quiller for attending on Sunday to present the trophies, Eugene Chang for his help in the organisation of the event, the Croquet Association for sponsoring the event and all those who took part. It was a very fun weekend of croquet for all those who attended.