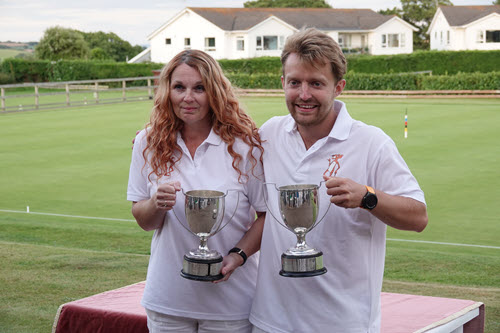 As in many of the previous years, there were a couple of last-minute changes to the entry for the English National GC Doubles Championship with Sandra Cornes and Neil Fillery joining the line-up, but it was very encouraging to see a full entry (16 pairs) and a rather stronger field than we have had in recent years.

Four of the pairs were previous winners of the Ranelagh Cups (Ivor & Richard Brand (1997, 1999), Chris & Roddy Sheen (2000, 2001, 2002), Jonathan Powe & Stephen Custance-Baker (2019) and Stuart M Smith & Steve Leonard (2020), and the top 6 pairs all had average grades above 2000. Also in the line-up was Ryan Cabble & Louise Smith who - although the 11th seed based on grades - had performed extremely well in the GC Open Doubles, reaching the semi-finals before being beaten by the eventual winners (Bamford & Bilton). Alongside the Sheens and the Brands were two other family teams: Jack & Graham Good and David & Sandra Cornes.

The format for the event was pretty standard - two all-play-all qualifying blocks on Saturday (7 rounds) followed by best-of-3 quarters, semis and final on Sunday alongside the Plate and Bowl.

In Block A, Tim Russell & Neil Fillery proved to be a very strong combination and took the top slot, losing only one of their 7 games and beating the top seeds (Lionel Tibble & James Goodbun) fairly convincingly along the way. The other three quarter-final places went to Tibble & Goodbun with 5/7 wins, David Warhurst & Duncan Reeve (5/7) and Powe & Custance-Baker (4/7).

The battle for the top four places in Block B was much tighter and came down to the last round of games. In the end, Jack & Graham Good (5/7) claimed first place due to their higher net hoop score, with Cabble & L Smith (5/7), SM Smith & Leonard (5/7) and Tim Jolliff & Raouf Allim (4/7) taking the other three slots.

Sunday was a long day for some! The Plate ran smoothly and was concluded by mid-afternoon with an impressive win for David & Sandra Cornes who beat last year's Plate winners (Philip Harris & Stephen Pearson) in the final. In contrast, the knockout featured some very long matches, in particular for Cabble & L Smith, who beat Warhurst & Reeve (7-6, 6-7, 7-1) in the quarters before embarking on a 4-hour tussle with Jolliff & Allim in the semi, which they eventually won (7-6, 6-7, 7-5).

In the other half, SM Smith and Leonard had a very tight battle with Tibble & Goodbun, winning at the 13th hoop in the third game, before beating Jack & Graham Good 2-0 in the semi to set up an intriguing husband v. wife battle for the title.

It was clear that Ryan & Louise were very tired after their long semi-final and the first game of the final went to Stuart & Steve fairly easily (7-3). But Ryan & Louise found a second wind and quickly took a lead in the second game, displaying the strong teamwork and steady, thoughtful play that had featured in their previous matches. They took the second 7-4 and carried their form into the third, again applying pressure on Stuart & Steve from the start before winning 7-4. Having been the strongest pair throughout the weekend, they fully deserved to get their hands on the Ranelagh Cups and we look forward to seeing more of them in future Doubles Championships.

In the Bowl (for losing quarter-finalists), Tim Russell & Neil Fillery continued to punch above their weight and ran out winners, beating Tibble & Goodbun 10-9 in the final.

Budleigh received warm praise from everyone for their wonderful hospitality and superb lawns (they seem to get better every year). Many thanks to John O'Gorman and his team who did so much before and during the weekend.

Key results are below. All the scores are available via Croquet Scores here: https://croquetscores.com/2021/gc/english-national-doubles-championship-ranelagh-cups