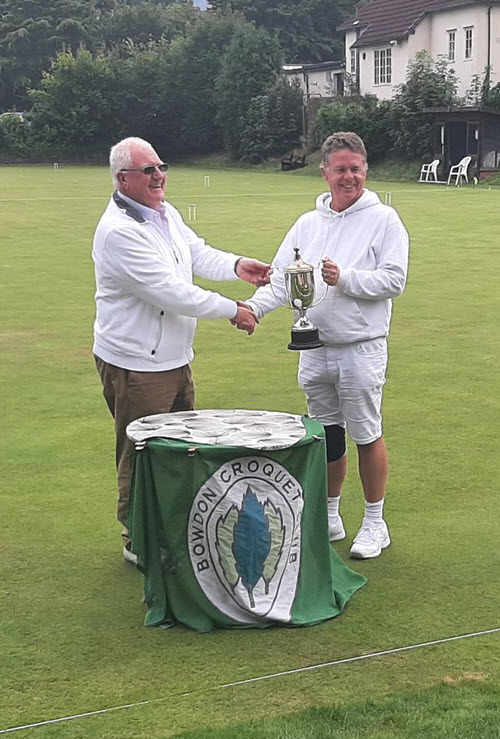 David Maugham won the North of England Championship at Bowdon, beating Mark Suter +20tp, +14tp, +5tp in the final. Full results are on CroquetScores and in the Rankings.

The field of 16 included 15 minus players, 7 of whom were -2 handicaps or better, and the hoops were all set to just under 1/32" in averagely firm ground. The weather was fine all weekend.

The first round went with seeding, as did the second (except for David Maugham beating Mark Avery), but in the semis Mark Suter beat James Death and David Maugham beat Alan Giraud - both in 3 straight games. In the final David shot well and made very few errors, so despite Mark playing well David was able to win 3-0.

A highlight of the event was James Death completing 7 peels of a nontuple against Michael Sandler - with the straight penult peel bouncing out (from about 9 feet slightly angled). Quite an achievement given the tight hoops. Surely someone will soon be the first to achieve this feat in a ranking game. Also of note was Alain Giraud's 2nd ever sextuple - the only one in the event.

In the plate knockout, Ian Lines unexpectedly won +1 from 4 v 4 back after Sam Murray pegged out two balls, and then Ian beat James Death +26tp 7th turn in the final.

On the Saturday evening everyone enjoyed fish and chips at the club, and on Sunday there was an excellent dinner at the Griffin to celebrate Alison's birthday.

The trophies were presented by Bowdon Club President Brian Storey, and thanks were giving to Bowdon for hosting the event in these difficult times and to Alan Mayne for preparing the top quality lawns and for setting the hoops so well.