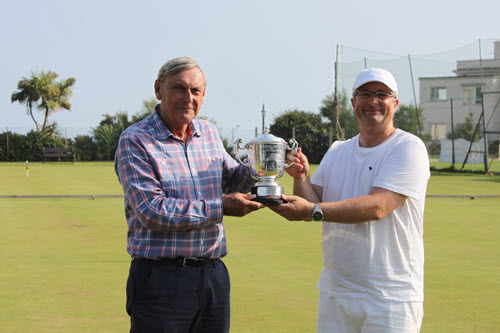 Sidmouth courts were looking at their best in late summer sunshine on Saturday 4th September and play commenced promptly at 09.30. The tournament was played as a Swiss with games timed at 2 hours 45 minutes.

Due to some administrative confusion after the regional finals, nine players travelled to the final instead of the eight expected! After consultation with the tournament director it was agreed that all nine should play and the manager co-opted a Sidmouth player (Ed Dolphin) to play, making a viable tournament without players having "byes". It was also agreed that as Ed Dolphin had not played in preliminary rounds he would not be entitled to receive the Trevor Williams Trophy should he win the event. It was fortunate that this was clarified beforehand as he won all his five games! The increased entry required a third court to be provided and we are grateful to the Sidmouth members who cancelled their games and thus enabled the event to proceed.

When the final round was played the event was still in doubt provided Ed Dolphin's winning streak came to an end. This almost happened as his game against Philip Snowden finished level and had to be decided on a golden hoop, which went in Dolphin's favour. As he was not entitled to the Trophy the runner-up had to be determined from 4 players each with 3 wins. No clear result was possible on the basis of who beat whom and the positions were based on net points gained. This resulted in Philip Snowden being the runner -up with Ged Smolskas in third place. Philip Snowden was thus awarded the Trevor Williams Trophy with his home club Fylde receiving the New Zealand Tray. This was a fitting result as Snowden was only denied being outright winner by losing his final game to a golden hoop.