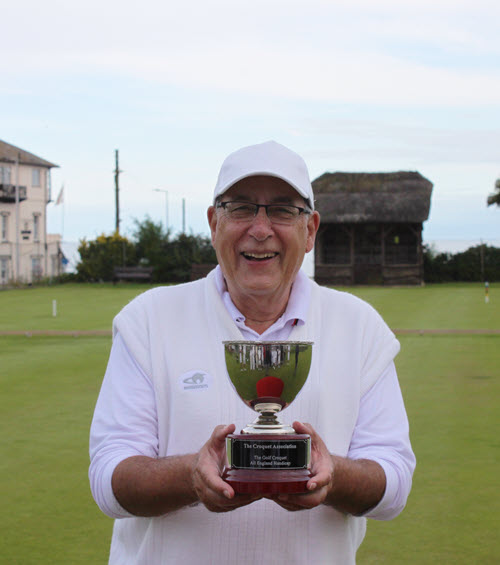 Roger Goldring with the GC All England trophy

The GC All England Handicap Final was played over the weekend of 11/12th September at Sidmouth Croquet Cub, contested by players from around the UK that had qualified from their regional events.

Players individual handicaps ranged from -1 to 7 giving a very broad spectrum of competitors and allowances of extra strokes.

Sidmouth's court preparations were as meticulous as ever, and the club offered a warm welcome to all competitors - not just in hospitality, but with glorious sunshine as well...!

The format was an " All Play All" arrangement, therefore the fourteen players had seven games on Saturday and six on Sunday, six games per round were double banked and one single banked, but we managed a rotation of players and courts to keep the event on track as no game time limits were imposed.

Both Ramsgate players, Charlie Martin (1hcp) and Todd Ballantine (2hcp) got off to excellent starts, winning their first 5 consecutive games, but were subsequently halted in their tracks losing the remaining 2 games on day one. However, other players were notching up their wins, with Roger Goldring (-1hcp) Phyllis Court; Dom Aavold (0hcp) Bristol; Andy Loakes (1hcp) Camerton & Peasedown; and Sarah Patton (6hcp) Guildford & Godalming all on 5 wins at the close of play on Saturday. The tournament was, therefore, wide open to a large number of potential winners at this point.

Sunday again bought beautiful sunshine, but a change of fortunes for Charlie and Todd winning just 2 of their first 4 games, meanwhile, Roger started the day on 4 straight wins. Quite a few Sidmouth Club members came to watch the tournament unfold, and around lunchtime players and spectators alike were serenaded by the town's brass band that could be heard in the distance!

Rick Lilley (3hcp) Phyllis Court built on his 4 wins from Saturday, gaining another 5 from 6 games on Sunday, narrowly missing the third place spot by 1 hoop difference, and overall 9 wins.

Another player that was quietly edging forwards was Heather Hardy (6hcp) from Ashby who took four wins from Saturday and added another four on Sunday, overall coming in 7th, losing out on 6th place which went to Todd Ballantine on hoop difference. Day one also ended strongly for Sarah Patton, but despite some hard fought matches on Sunday, Sarah came one place below Heather into 8th position overall with 6 match wins.

For players in contention of overall victory, a pivotal match arose in Round 12 when Andy Loakes was due to play Roger Goldring. At this point, Andy needed to win this game to draw level with Roger, which would make things very interesting at the top of the table. It was a close fought battle, culminating in the golden hoop and indeed was won by Andy.

This meant that Roger Goldring, Dom Aarvold and now Andy Loakes all sat on 9 wins, with Charlie Martin on 8 as we went into the final round.....

To make matters more interesting Charlie was playing Roger, in which a win could have bought Charlie up to 9 wins, and Dom was playing Andy, both on 9 wins with a 10th to play for.

Two interesting games ensued, but the on-form Roger proved too strong for Charlie as he went 5/2 up, finally taking the game 7/4. Meanwhile, Andy and Dom had a similar game with Andy taking the win, again with a 7/4 score line. Dom Aarvold took 3rd place, with Charlie Martin on 8 wins in 5th position on hoop difference above Todd Ballantine.

As the lowest handicap in the tournament, Roger had at times needed to work very hard with up to 8 free strokes against him, so a well earnt and deserved title of the All England Handicap Winner 2021.