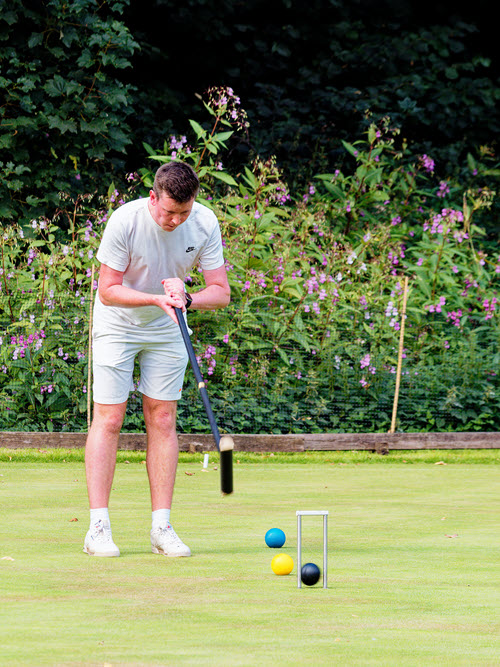 J-P Moberly in action at Nottingham

John-Paul Moberly retained the GC First Eight, and in doing so, ensured his name is still the only name on the new Ricki Savage Memorial trophy. He is also the first to defend the First Eight title since Ryan Cabble in 2012.

Nottingham Croquet Club were as welcoming as usual and the players enjoyed the much improved facilities after the renovations last winter. Among the 8 players, were three previous winners - including the defending champion - and Rachel Gee as the top four seeds, as well as the current GC Open Champion Aston Wade, and U25 Open Champion Euan Burridge. Indeed, this was the first year in which half of the field were under 25 years of age, and 6 out of 8 were under 35.

The 8 competitors played best-of-three 13-point games in the all-play-all block from Saturday to Monday morning to determine the top four who would progress to the knockout. The first match on the Sunday morning between Rachel Gee and Stephen Mulliner took 3 hours for the first two games, so they were asked to pause the match, have lunch, and come back to it later, if necessary. In the end, the outcome of this game couldn't have affected who progressed from the block, so it was abandoned, which meant that Mulliner was the only one to play exactly two games against everyone else. It also meant that the only match Gee lost was to club rival Ian Burridge. By contrast, Moberly finished all of his matches, and the only one he lost was to Gee, and was the only player to win 6/7 block matches. Euan Burridge matched Gee on 5 wins, having only lost to the top two seeds, Moberly and Gee. Wade came in fourth on 3 wins, just bettering I Burridge on net games.

Despite having lost to him in the Open Championship Final, and only narrowly beating him in their block match, Moberly dealt with Wade with relative ease in the first semi-final, albeit after a closer second game, winning 7-2, 7-6. All of the drama happened in the other semi-final. Fellow club members Gee and E Burridge are familiar with each other's games, to say the least. Their recent head-to-head is fairly even - Burridge beat Gee in last year's London Masters, but the outcome was reversed in this year's Nottingham Championship, and in the block match on the previous day.

The first game was a straightforward win for Gee, before E Burridge managed to return the favour at hoop 13 in game 2. In the deciding game, Gee had a comfortable 6-2 lead, but Burridge battled to win 9 and 10, and got the advantage at 11. He manufactured a chance to run the hoop and did so, and was pleased to see the ball continue down the lawn and also run hoop 12 to level the match. He also had his other ball onside in the vicinity of hoop 13. The match was not over yet though, and both players fought hard to give themselves a chance of winning the hoop. Surprisingly, Gee missed a 2 yard attempt, which allowed Burridge to get back in and have a go from the boundary, which also missed. With his next shot however, Burridge had another go from the boundary, and took barely any wire, and the ball shot off the south boundary and into the bushes. Burridge had his revenge after losing their block match and beat Gee 3-7, 7-6, 7-6.

The final started at 5pm. In the first game, Burridge was beaten by Moberly's consistent clearing and hooping, which completely vanished in game 2, and Burridge won that to reach 1-1. 2 hours later and we were none the wiser as to who the winner would be. Burridge was 1-2 down in game 3, but given Moberly's hooping in the last hour, elected to leave him a 3 yard hoop shot after a battle at 4, which paid off as Burridge capitalised on Moberly's miss and was able to quickly take a 3-2 lead after the clearance from behind 4 with the same ball.

After control of hoop 6 see-sawed from one player to the other, Burridge hit what could have been a decisive clearance, sending Moberly to the north boundary with his other ball ready to secure hoop 6, and when the return clearance missed, Burridge would have been in a strong position for the match at 4-2, but his hoop attempt hit the outside wire and was sent almost to the west boundary. This allowed Moberly to regain control again, level at 3-3 and resettle in the match. Burridge had a go at running 7 from the boundary, but the hoop wasn't having it. Moberly was able to battle through 7 and 8, and Burridge let a few unforced errors creep in at 9 and 10, enabling Moberly to take the final 7-3, 4-7, 7-3.

James Galpin beat Mulliner in the first round of the Bowl 10-4 with superior clearing, which he brought with him to just as easily defeat Richard Bilton 7-5, 7-3.

Nottingham Croquet Club were holding a barbeque for members on the Sunday evening, and the players very gratefully accepted their invitation to join, while the club's members enjoyed watching some thrilling GC. WCF President Ian Burridge, also took this opportunity to present a gift from the Management Committee to Stephen Mulliner, who was retiring as Secretary-General the following week.

All results are available on Croquet Scores.