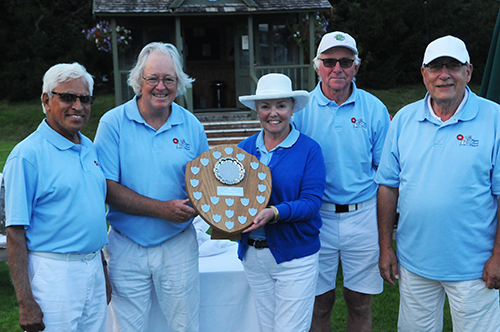 Phyllis Court are the National Team Handicap Champions thanks to a Hollywood style comeback in the final of the GC Federations Shield competition yesterday.
The Henley side trailed Sussex County for the entire match and had appeared sunk by mid-afternoon at 0-3 down, but came back in dramatic fashion to win 4-3 in an exhilarating finish.
A late start due to the Sussex team's traveling delays, made way for an equally slow start on the Phyllis Court courts that are now showing much improvement and which had been presented in splendid condition for this prestigious match.
Only the doubles rubber was completed before the lunch interval and Phyllis Court's Roger Goldring (handicap -2) and Raghu Iyer (3) were defeated 4-7, 4-7 by the Sussex pair Tony Jolly (2) and David King (3), who both displayed accurate clearing skills in addition to using their greater number of extra turns to good effect.
Unusually the morning singles rubbers took longer that the doubles with the players handicaps providing two excellent tight contests that had to be suspended for lunch at one game apiece.
The host's Ian Norris (-2) was evenly matched by the visitors Roger Sutton (-1) with scores of 7-5, 5-7, and likewise Phyllis Court's captain Chris Roberts (-2) was held by Linda Gavigan (7) who's intelligent use of her nine extra turns, left the pair tied 7-5, 4-7.
A decision was made to start afresh with the afternoon program of head to head singles matches and only return to the unfinish morning games if the overall team match result was dependent on them.
So, Phyllis Court trailed 0-1 in completed matches going into the second session and by half past three, the prospects for a home victory were looking grim, when their semi-final hero Goldring (-2) fell to Jolly (2) 6-7, 4-7, and was followed shortly afterwards by Norris (-2) who faded after a bright start against Sussex captain King (3), 7-6, 4-7, 3-7.
With the team match score at 0-3, Sussex needed just one of the other two matches still in progress for victory and they came very close indeed, but for a life-saving seven-yard hoop score from the boundary by Phyllis Court's Iyer (3) at the last hoop of his second game against Gavigan (7).
Gavigan had beaten Iyer in their first game without taking any of her four extra turns and was in good form all day but perhaps had the wind taken from her sails by Iyer's dramatic score and the Phyllis Court man finally got his side on the scoreboard 5-7, 7-6, 7-3.
There was drama to on other court too, where Roberts (-2) had to pull out all the stops to contend with Sutton (-1) and succeeded with a string of very long-distance clearances, including a monster 23-yarder to hit a half ball target to turn the first game.
Roberts eventually prevailed 7-5, 7-6, bringing the team match score back to 2-3, meaning that all then hinged on the resumption of the two suspended morning singles rubbers, and these were started straight away.
Norris (-2) blew away Sutton (-1) more easily than the Sussex player's performance thus far had suggested likely, and with the team match score now tied at 3-3, all eyes fell on the Roberts (-2) versus Gavigan (7) encounter, and the 'picket fence' of nine extra turn sticks that the Phyllis Court man had to overcome.
Gavigan again used her extra turns cleverly and she forced Roberts into two well-executed jump shot scores as he kept her lead in check, as her handicap advantage unwound.
Again, Roberts' long-distance clearances were on song and were enough to make-up for some below par hoop running attempts.
Gavigan's extra turns finally expired with an untypical error at hoop 10, and with the score 5-5, the more experienced Henley player was able to control the game with a no risks patient approach, to an eventual and much relived finish 7-5.
With the team match settled at 4-3, there were compliments all round from competition Director Frances Colman, who commiserated with Sussex who had come so close, and congratulated her own club team, as she presented the GC Federations Shield to National Handicap Champions, Phyllis Court.
.
.
Results detail, Phyllis Court scores first.
(the third games marked *, were played at the end to decide the team match)