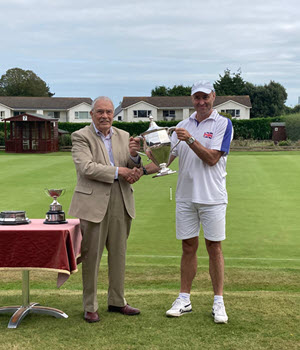 You would think that this President's Cup story would start on the Thursday 9th September 2021, as this was when the players played their games. This would be incorrect thinking, so let me begin on Wednesday 28th July 2021, the day the selections are announced.

Every year the four top sets of eight players are selected to play in these four prestigious events, the President's cup being the top available eight players in the country. What also happens every year is the excitement around the selections themselves, the questions about who will make themselves available, who do we think will be selected and who has 'done enough'? Not to mention the excitement of the upcoming selection for the MacRobertson Shield Team (World Team Championship Team), where many of the players in contention for a team spot will be competing at the Presidents Cup, and will want to perform well for the team selection committee.

The selection policy is complicated and will always be a hard and thankless task for the selection committee who take charge of the challenge, players have to show their worth through the season where their wins, losses, quality and quantity of croquet played will be considered and compared.

This is precisely where the fun starts for the rest of us who look on with great anticipation, we will have heard reports about who has been 'off their game' and who is 'hitting everything', making our own minds up as to whom should be selected. This year 5 of the selected players had won championship events in the selection period; Mark Avery, James Death, Harry Fisher, David Maugham and Mark Suter. With Samir Patel winning the Chairman's 2020, then both Christian Carter and Stephen Mulliner ranked 14 and 10 respectively in the world having won matches against other President's Cup players, you can see why these guys are the cream of the crop.

Once the selections have been made, it's down to the serious business of the predictions contest. This year there were 47 predictions made, the favourite for the President's cup was James Death, who had 17 backers to win. As an early favourite, the flamboyant player was picked by many before the selection period had even finished. But did they pick to early?

Over the four days of play, the event was played to 'Advanced rules' rather than in previous years being 'Super-advanced rules'. The normal advanced game at this level was predictably a less interactive game, where 15 games finished +26tp, 3 games +26sxp, 1 game +26qp and 1 game +26 with no letters. Many of these games would have ended with the loser of the game not even taking croquet. Although the precision and perfection of these many four ball breaks and peeling turns was of course impressive to watch, I did find myself picking blackberries and playing the odd roll-up game around the corner from the action.

As a spectator of the event I just have to mention the fabulously welcoming and cheery club that Budleigh Salterton Croquet Club has become under the leadership of their Chairman John O'Gorman. From providing tasty lunches and treats to the players and their guests through to bringing his own family along for some croquet fun in the sun, John made sure that all of us were welcomed with open arms, even providing mini croquet for the mini spectators. I should also mention for those of you who like more croquet than casual statistics, the lawns were in fabulous condition which made for perky Pres players all weekend. Who doesn't like a lawn speed of 10 to 11 for a feast of peeling turns?

As usual at the Eight's events it became increasingly clear that the last day of play would be quite the spectacle, with four players in contention for the win on day three, then becoming two on day four, the croquet became a little more interactive between players. Mark Avery and Christian Carter were the final two players who could take home the trophy, by round 14 Mark Avery had completed yet another meticulous triple peel to finish on 10 wins, but with Christian Carter on 9 wins and in his final game against Stephen Mulliner, all eyes turned to the spectacle showing on Lawn 2. Mulliner had produced a fine break completing a TPO (Triple Peel on the Opponent) to peg one of Carters balls out, having done a single POP (Peel on the Opponent) so Carter was starting with his other ball on hoop 2. This final game of the tournament provided all the interaction we could've possibly dreamed of, with Carter hitting what seemed like anything and everything, and Mulliner playing the long game with tight wires and some superb strategic leaves, the crowd were engrossed for the entire game. Knowing that if Carter won there would be a play off between him and Mark Avery, but if Mulliner won Avery would be the outright winner, the pressure was building for the final two players. Fortunately there is lots of space for more and more spectators came along to line the north boundary of the court, whilst of course tucking into a delightful afternoon tea.

It was the 2016 World Champion Stephen Mulliner who finally took the win, which of course meant that with eight TPs out of his 10 game wins, Mark Avery took the title.

I reflect on my spectating time at the event and as any great spectator does, my croquet from the side-lines commentary, was not only perfect, but had the players have listened to my thoughts they would all of course be on an 8 way tie. Alas, it was Mark Avery himself that takes the award for best quote of the tournament, whilst addressing my tactical genius thoughts on his opponents croquet "Puh, It's an easy game isn't it?!" (Rolly eyes emoji, winky face emoji)