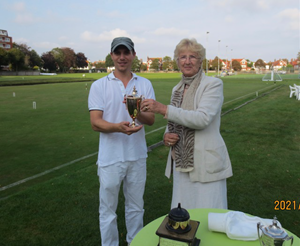 The sun shone, a gentle breeze blew, a steady rain of beechnuts fell on lawn 2, crows, starlings and seagulls fed on the emerging leatherjackets whenever the lawns were unoccupied and one cheeky magpie kept raiding the clubhouse in search of cake: autumn in Eastbourne saw one of the strongest fields of recent years assembled to do battle in pursuit of gold and silverware. Unfortunately, of the 22 original entrants 4 had to withdraw before the event, including our most devoted attendee (23 appearances) and defending champion David Maugham.

First to impress, in full flow on Friday, was James Death. In the space of a little over 90 minutes his two wins against Ian Lines saw one sextuple attempt come to grief at the last - having completed all six peels he was unable to peg out after hitting the peelee while making rover himself - no such problem in the second. Then Gabrielle Higgins, although she got one ball round, suffered a similar fate on Saturday morning going down to two sextuples in just two hours! So, the peeling prize was settled by 11:30 on day two! Mark Avery was also on good form and earned his place in the final without dropping a game. Things did not go quite so smoothly for the other finalist Jamie Burch, the only seed drawn in the first round - each of his matches against Debbie Lines, Pete Trimmer and James Death went to three games netting him more lawn time than any other player. Undaunted he secured two wins against Mark in games which followed the same overall pattern with one or two turns of cat and mouse thrown in: Jamie went early to 4-back; Mark tripled peeled Jamie's ball and pegged it out and made a few hoops with the other ball; Jamie hit and finished, winning the championship for the fourth time.

Not to be outdone on the peeling front Pete Trimmer and Duncan Reeve each demonstrated their skills with a single sextuple win in the Swiss. At the close of play on Saturday Ian Lines and Gabrielle Higgins led the field in the Swiss, with Duncan Reeve and Sam Murray close behind. The top eight contested a knockout on Sunday where Gabrielle and Sam won through to the final which was won by Sam with a triple peel.

The hoops were very firm in the dry ground which also made the lawns moderately fast - thanks to groundsman John Crisford and his team for their preparation. Thanks too to Hilary for the lunches and a succession of ladies for the teas.