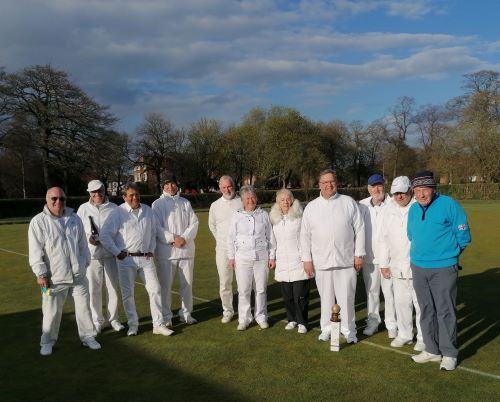 This year's event, our thirteenth, involved twelve players from Northern clubs - Middlesbrough, Tyneside, Belsay Hall, Keswick and Fylde. The tournament was a heat in the national One-ball charity, this year's being MIND. The weather was fine but cool and the three lawns used were in good shape for early in the season.

Handicaps ranged from -½ to 20 (those below 2 played off further reduced HCs) and one third the bisque difference was used. Time-limits of 40 minutes were very rarely reached. Round robin draws were selected by the manager.

Our keen competitors enabled us to complete the ideal eleven rounds (meaning that comparative scoring was thankfully not needed). That said, very little separated the top three players, who each had eight wins and very close net points.

A special mention should be made of Pat's enthusiasm, she never having played in competitive singles before, let alone One-Ball.