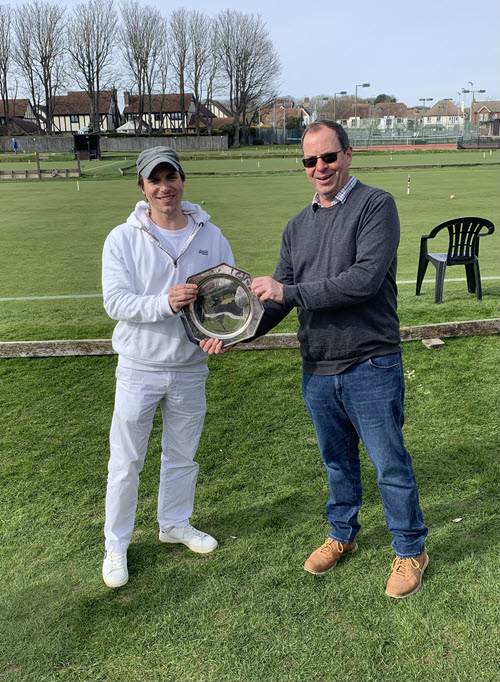 Unfortunately Covid caused a late withdrawal and a slight re-organisation of the draw. Saturday was chilly - freezing actually - with a cutting wind at times, if interspered with some weak sun. The results proceeded as expected to produce semi-finals of Jamie Burch vs Nigel Polhill and Dominic Nunns (the current trophy holder, albeit from 2019) vs Phil Eardley. Both matches finished their first games on a chilly Saturday early evening and resumed in sunnier, warmer weather on Sunday morning.

In Game 1, Jamie Burch ended up on a very delayed triple peel attempt, successfully peeling hoop 10 and making the long rush back down the lawn to 9, before eventually coming unstuck at hoop 12. He then made a posthumous peel to finish for peg and peg. Some interaction ensued before Jamie hit a 15-yarder flush in the middle, rushed oppo's other ball to partner in corner 4, making the cannon. Taking care not to send oppo off along the south boundary, the rush on partner went close enough to the peg to complete the peg-out to win and go one up. In game 2, Jamie missed a straight rover peel on a 5th turn triple peel. Nigel then unfortunately blobbed hoop 9 on an otherwise successful turn, from which Jamie was able to finish +18.

The other semi pitted last year's British Open Doubles semi-finalists against each other. In game 1, Dom Nunns hit in and made 9 but was only able to make an Old Standard Leave with a fairly tight rush set in corner 4. Phil Eardley sportingly admitted in the post-match analysis that having aimed for the corner ball he was somewhat fortuitous to not only snick the other ball, but to do so in such a way as to create a corner cannon, making the ensuing break start easier. This proved something of a turning point. Dom missed his first lift, and then, after Phil made a break to peg with one peel and a decent leave, narrowly missed his second as well; Phil finished for 1-0. Game 2 began with 2h20m on the clock. Dom missed a short hit-in attempt, but then succeeded with a longer one, making 9 and a Maugham Standard Leave. After Phil missed, Dom made a fluent break but was unable to coax the balls into peeling positions and then made an indifferent leave which was hit. Phil made 9 hoops, with the clock already in play, but offered a long shot at a triple target down the east boundary which Dom hit. However, he only made one hoop, leaving Phil with an 11-yarder to hit. There followed a swashbuckling turn, with time already called, and Phil needing at least one peel in addition to his break to prolong the game. He managed two peels, allowing him the luxury of pegging off his own ball and one oppo ball whilst still a point ahead. Dom then missed his last-gasp 18-yarder so Phil won 2-0.

In the final (best of 3) Jamie played a supershot opening in Game 1 and after two misses, he had the first break, making 9 hoops and a Diagonal Spread Leave. Phil narrowly missed the long shot at a boundary red. Jamie continued with a tp which became a delayed double which he completed to take the first game.

In Game 2: Phil missed Jamie' supershot opening but Jamie fails to capitalise and Phil makes 9 hoops with black ending with a diagonal spread. Jamie hit the short shot and looked as the break progressed to be going for a tpo; in the end Jamie finished his turn with two peels on opponent and was able to finish the turn under control and peg his ball out. Phil saw some action in the three ball ending but eventually Jamie got in on a three ball break and finished to win the match and the (absent) Southwick Salver.

This was Jamie's seventh trophy at Southwick and the fourth time he has won this event.

Plate event
The plate event - for a bottle of wine - was managed (the verb used rather loosely!) as an Hands Egyptian and allowed all players not remaining in the main event to play what games they wished. As is often the case there were some breaks when no-one was available to play. By dint of some extended (and possibly suspect) maths the Manager declared Nigel Polhill the lucky recipient of a bottle of Southwick's best plonk.

Thanks to all for taking part and to Dominic Nunns for being Joint Manager.