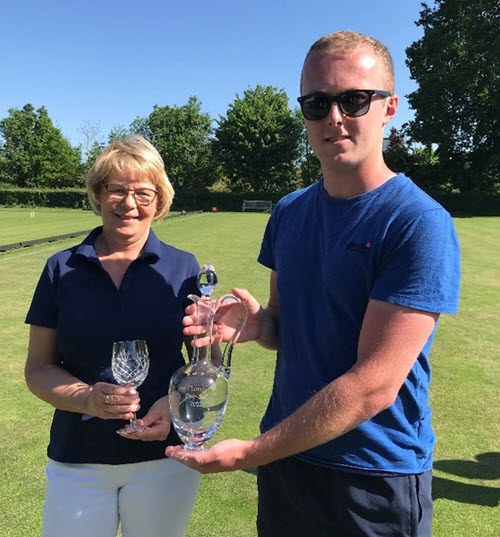 Diana Wilson and James Galpin with their trophies at Surbiton

by Kevin Carter at Nottingham & Surbiton
13th May (Other News)

This year we had two Regional Finals for the annual one-ball competition. The addition of a more northern final enabled and encouraged more qualifiers from the North and Midlands to anticipate.

At Nottingham, we had 17 players, after three late withdrawals. This was the first time that Nottingham hosted a regional final, and they did so very adroitly. It was fitting that one of its members won. Mark Innes (20), only started croquet last year and was playing off the maximum handicap, but he is clearly a natural and very competitive. He finished unbeaten, with 8/8. The runner-up spot was down to a play-off between Cathy Dance (14), of York, and Fiona Whittaker (20), of Bowdon, the former winning on the last shot of the match.

It was clearly a day for the higher handicapped players over the elite players, with Eugene Chang (-5) and Callum Johnson (-4) down the field, along with the very first winner, Anthony Miller, in 1994, when it was called the 'Winchester One-Ball', and before it was a charity event..

Surbiton's better established final had 44 players and was the largest and probably also the strongest ever assembled. Not only were there four minus players, we also had four previous winners of the Charity OB Championship. It should be especially mentioned that we welcomed three qualifiers from Carrickmines, who flew over to take part in the day.

The winner was James Galpin (-5), of Nailsea, who started off well and then just got better. We had not seen such accurate shooting and hooping since Rutger Beijderwellen (-10) two decades ago. He spent the whole day seeing off other unbeaten competitors, including two great newcomers in Gareth Hobby (20) of Caversham and Brenda Hawkins (20) of Compton. The tea-time final was played between James and Diana Wilson (14), of Roehampton, also in her second year of croquet and who was the only other player by then within touching distance of the leader. Diana played with great touch and more than a few bisques, to get within three hoops of James but that was not enough. The finalists received their trophies from CA president, Quiller Barrett.

This year's Charity One-Ball championship again broke records. We had 47 heats, with just under 600 playing. Thanks to the new Nottingham regional final, 61 competed in the two finals together. Provisionally, we raised £8119, plus a further £668 in Gift Aid for MIND, the mental health charity (except for the contribution from Ireland, which instead went to an equivalent local charity).

Next year, we hope for even more heats and players, and of course cash raised for a good cause!