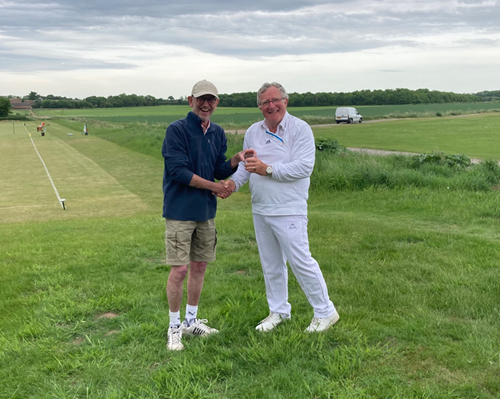 by Ross Bagni at Wrest Park
20th May (GC)

The day started and sunny. The players were in 4 blocks of which 3 sorted themselves out easily. Terry Collis (3 wins) winning Block A with Steve Fisher second ( 2 wins) . Block B was similar with Judith Pengelly and Edwin Bone coming first and second.

Block D was much closer with Simon Draper and Jane Powell having 2 wins each. Jane came first with a better hoop difference.

After lunch the top half played quarter finals with Simon Draper & Edwin Bone making one semi and Brian Jamieson and Steve Fisher the other. Both were very tight matches with Bone and Jamieson coming out on top to contest the final

The plate quarters, semis and final were played in a timely manner with Andrea Widdison beating David Boxell in a close final on the 13th hoop.

Ross Bagni, the manager, thanked all the players for making his first tournament very easy and presented the prizes