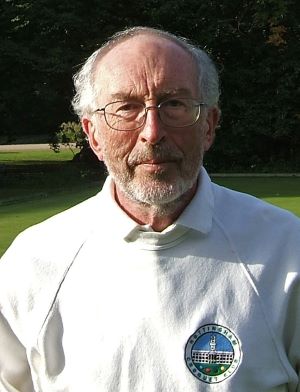 The CA's Council is delighted to nominate Ian Vincent as a Vice-President of the Croquet Association.

Ian first came across croquet whilst staying with relatives in Ireland. He re-discovered it at Cambridge, and played in his first tournament in 1972, so has been a CA member for nearly 50 years. He has played several tournaments a year ever since, mostly A class events, but also in the Nottingham annual week, which he managed for some years.

His involvement with the administration of the sport started at the Southwick club, while researching at Sussex University, where he became, by some margin he suspected, their youngest ever Committee member. Shortly after joining the Nottingham Club, he was asked to become its Hon. Secretary, a post held for more than 25 years between 1978 - 2016. He is the current President of the club.

He accepted the post of Honorary Secretary of the CA in 2008 and continued until 2021, bringing with him years of knowledge and experience of the Croquet Association. His work is now undertaken by a Secretariat.

He has put his IT experience to use by running the "Nottingham List", an e-mail list for the discussion of croquet, for many years, starting when news groups were the only form of social media.

At the Nottingham Club he has guided successive club chairmen and presidents through countless agendas, steered the club through constitutional changes and developed useful contacts with local authority officials. In addition to his continuous formal service to the club he was also the club's lawns manager for many years. He has coached at various levels, trained and examined referees, managed tournaments from beginners' handicap events to championships, sorted security problems and can turn his hand to catering.

On the international scene Ian has used his many years of experience as a referee, guiding the CA and WCF through 20 years of iterations to the internationally accepted Laws of AC. He has also been involved in producing the Rules of GC since 2015. As a respected Championship Referee, he has officiated at four world championships held in England and travelled elsewhere to officiate at the MacRobertson Shield Test Series between USA, GB, Australia and New Zealand.

Ian is an outstanding ambassador for the sport of croquet, both domestically and internationally. His self-deprecating and modest style and his diplomacy, understanding and appreciation of everyone's view has earned respect throughout the croquet playing world.

As set out in clause 17(b) of our Constitution, this nomination shall be treated as a motion at the Annual General Meeting to be held in October 2022.