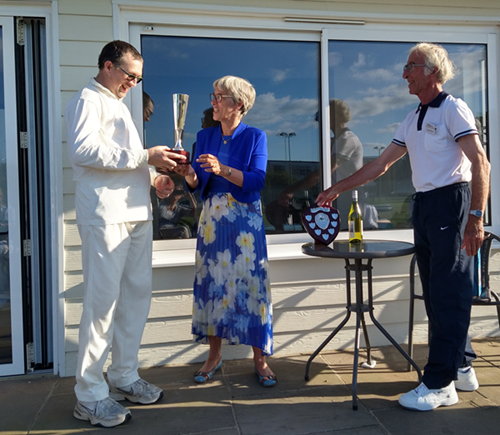 An unusually under subscribed event and very late closing date contrived to keep the manager's AMD format under wraps until the first morning. With three late entrants and two losses to Covid, personnel were coming and going at a similar rate to Cabinet Ministers!

The recent dry weather coupled with virgin hoop positions led to challenging hoop-running for all including the defending champion, Nick Archer, and nearly all games were hard fought affairs.

The twelve competitors completed five 19-point games during day one's block play. Top seeds Nick Archer (Block A, 5 wins) and Raouf Allim (Block B, 4 wins) duly upheld their ranking positions with both Stuart Peters (A) and David Pitman (B) punching above their weight in their respective blocks.

All quarter-final matches went according to seeding with Nick overcoming a dogged performance from 7th seed Rick Lilley, Stuart beating David, and Raouf beating Sara Anderson all in two games whilst Ron Carter took Chris Roberts to a third.

The first semi-final between Nick and Chris was decided by a near reprise of last year's third game tie-break which came back to haunt Chris when he again missed the chance to convert. In the other match Stuart and Raouf shared the first two games with Raouf finally proving too strong in the decider.

The planned start time for the final was agreed in order that the Lord Lieutenant of the Isle of Wight, Mrs Susie Sheldon JP, and her deputy Kate Collins could attend. Both ladies were interested to see how 'Garden Croquet' had developed into a skilful and tactical game, as expertly demonstrated by Nick and Raouf. Once again, true to seeding Nick prevailed in two games and retained the Centenary Cup for a second year.

The prizes were presented to Nick and Raouf by Mrs Sheldon and also to another Ryde perennial visitor, Roger Goldring, winner of the Plate.

Thanks undoubtedly must go to the Tournament Referee, Vernon Gibbs, and the lawn maintenance team for all their work this season, especially our 'new kid on the block' Steve de Boise. Thanks also to the other Ryde members who provided lunches and refreshments over the two days under the management of Joan Grove.