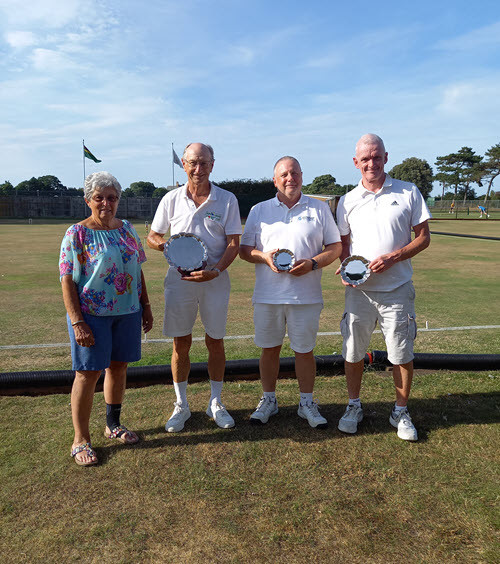 Due to the unfortunate late withdrawal of two players the total entry of entrants who met at Hunstanton was reduced to 14 in number. However, the manager was prepared for this occurrence and the format was rapidly re-arranged into two blocks of 7 who then cross-blocked in the first round in which the top four of each proceeded to meet in the knock-out quarter-finals.

As forecast on the Saturday the weather was unusually hot but luckily this was compensated by a fresh north wind which kept the temperatures at a passable level. The lawns were extremely fast and the hoops set reasonably tight which meant running hoops proved a challenge to say the least. However, as expected play was of a high standard with no prisoners taken and the amount of 13th hoops run was high.

On the Sunday the weather as forecast started to rise with the north winds being replaced by the milder south-westerly's play slowed as the temperatures started to rise but, fortunately the quarter and semi-finals all managed to play the best of three games, but, due to the extreme heat in the mid-afternoon it was decided on health grounds the final round would be one game of 19 points.

The final game which was contested between Stephen Custance-Baker and Mike Bilton proved a very close match in which hoops were regularly exchanged and at one point Mike held an 8 -6 lead. However, Stephen put in a late rally to run out the 10 -8 winner.

The Shield play-off winner was Mark Buckley who managed to over-come Mike Hills whilst the Plate Block winner was Rick Lilley whose was tied on 3 wins with Alison Murray but was declared the winner on a better net wins total.

Handicap changes were recorded for: